Under comments in a previous posting, JerryM asked to see both the original photo and the finished image so he could see the changes made. Great suggestion, thanks for asking Jerry.

He's right, we all see wonderful photos everywhere, but are never shown what the camera initially captured. Only what the photographer wants us to see. So here are several examples of original and final images, gives you a peek behind the curtain so to speak.

First going back to my previous posting, this was the early morning shot I took in Rancho de Taos. The camera being very sensitive, captured more light than was actually there at the time.
The colors were not as rich as I wanted for this early morning shot... 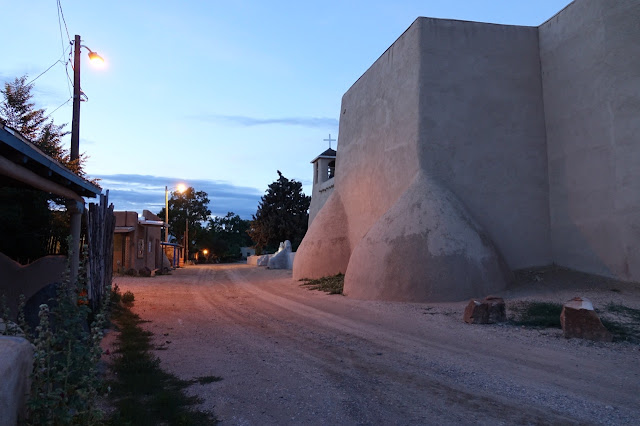 The final image, richer color, more shadows, less light.
The power lines in the upper left corner were distracting, pulling your eye out of the photos,
so removed them. The mission structure looked like a grey monolith,
so darkened it to bring out the lights in the middle.  More contrast was needed.
I wanted to highlight the tire tracks in the dusty road as they lead your eyes into the image...
now it has more of that crisp cold pre-dawn morning feel. 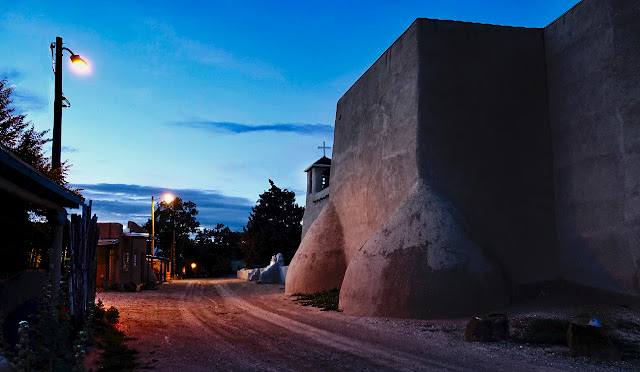 This late afternoon shot was okay as is, but the car was distracting and the sky was dull. 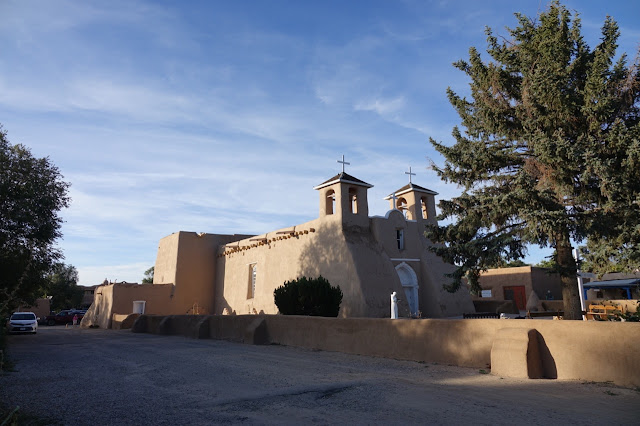 Cropped the photo, applied a sky accent to the clouds that the camera had captured,
then lowered the color saturation to accentuate the setting sun. 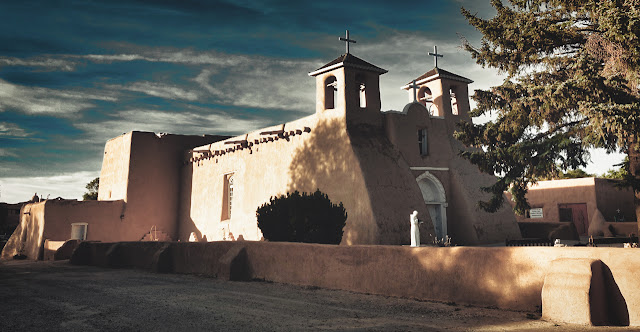 Here we have an early morning empty dirt street, with a street light still on in the distance.
Has an old Mexico feeling but not quite there. 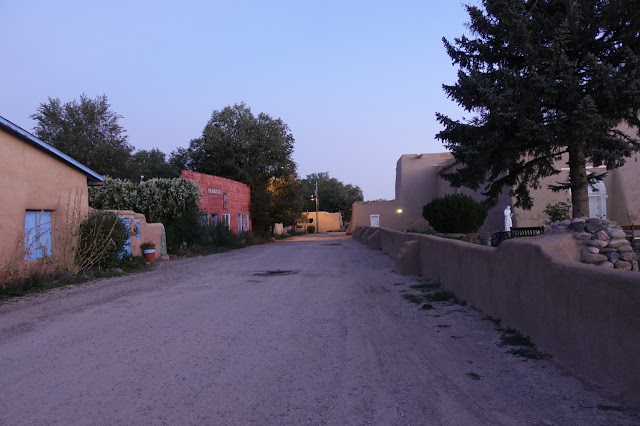 Converted the image to an old tintype print to age it, took out the color, cropped it and gave it depth.

Here is another typical raw image.
Was trying to get a good angle shot of the Isleta Mission south of Albuquerque,
but this stranger kept standing or walking into my shots. Was hot, middle of the day, not a good time to be taking photos anyways. 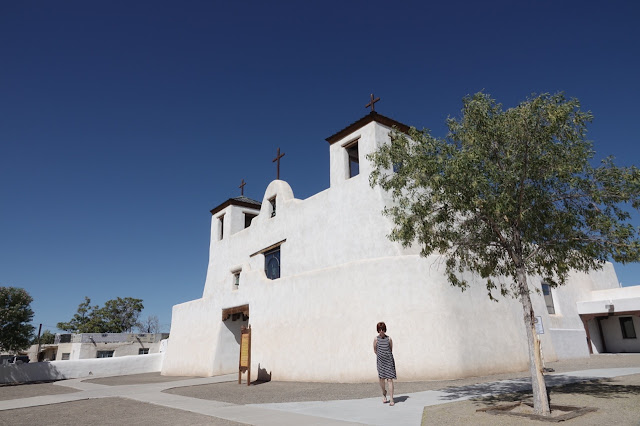 With a cloudless sky, had nothing to work with up there.
When you get lemons, make lemonade.

So crop the sides, convert to higher contrast B&W... Done. 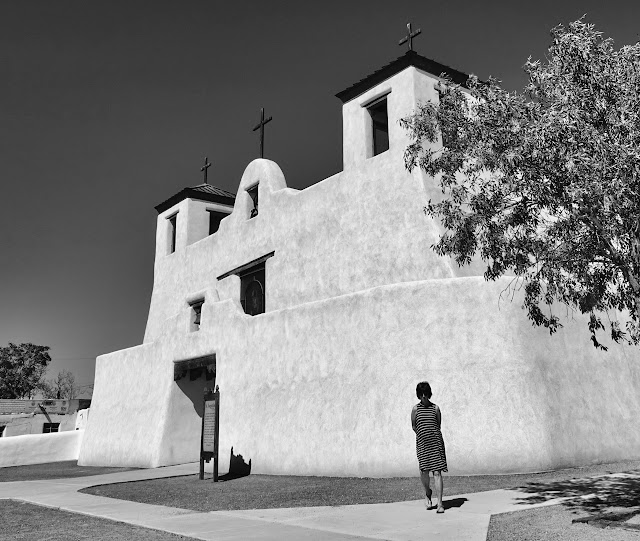 And that is the amount of post processing I do. Some shots need a lot of work to bring out the desired look or feel. Others are a simple click, click and you're done.

So what is the difference between a snapshot and a photograph?

In my mind, a snapshot serves to offer information about people, objects, location, etc., i.e. facts.
It gives information to the viewer. Like this shot of my rig at a I-10 rest area in southern New Mexico. Not a particular attractive image but it provides details to the viewer about the type of trees in the area, the weather, the bike, etc.  A snapshot... 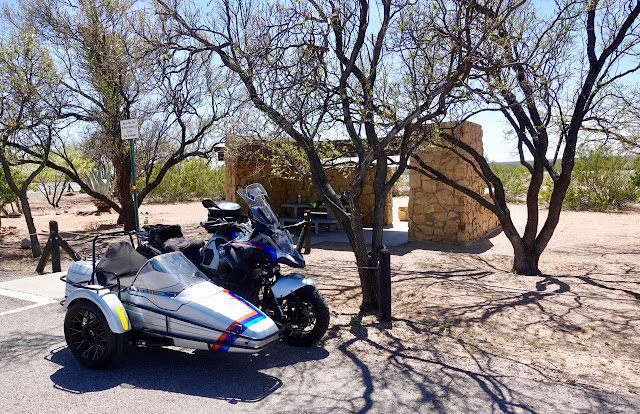 Now this next is a photograph of the same sidecar rig, color was enhanced, image cropped, sharpness increased, warmth added. Doesn't really tell you who, what or where.

This image was accepted for a national publication and featured in their calendar.
The snapshot above would have been rejected. 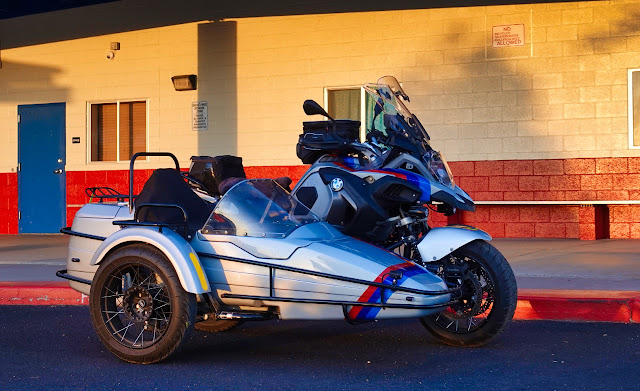 The first image gives you information, the second is eye candy.

Thanks for following along.