Wow, has been two months with no update on Project Warthog. Time to remedy that!

The crew over at Texas Sidecar Company could not start work on the Rocket until they cleared out a few other projects ahead of mine. Once they started work though, things moved along quite nicely.

Last time we visited the Triumph Rocket, it was waiting to go to the TSC shop in Houston. 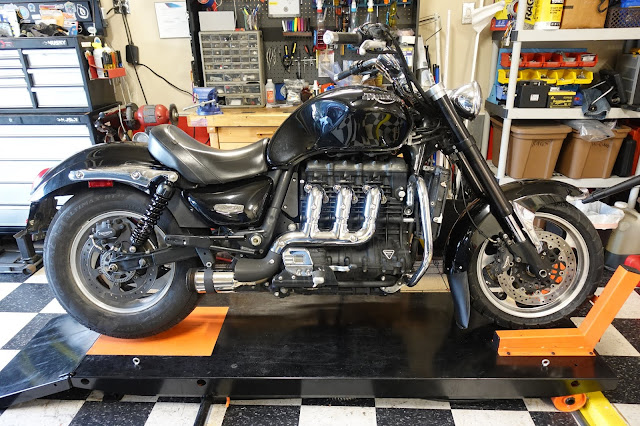 From the sidecar frame, the camper body was removed. The frame was then detached from the Vstrom1000. The well-built Vstrom motorcycle was sold to a gentleman from Kentucky.

The frame now sits, waiting to go to TSC to be matched up to the Rocket. 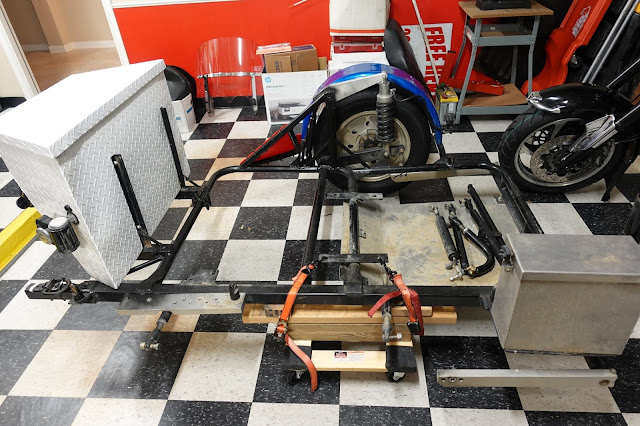 Initially, all projects starts slow as they work through the design and planning stages.
Then momentum starts building as the ideas and reality come together.

With both halves in their shop, John at Texas Sidecar studies where the mounting points line up, where new brackets are needed.
He spoke with other sidecar builders about their experiences with building a sidecar for the Rocket.

This is the first Rocket build for TSC.
Because they are local and I trust Kent and his crew, decided to have the build done in Texas. 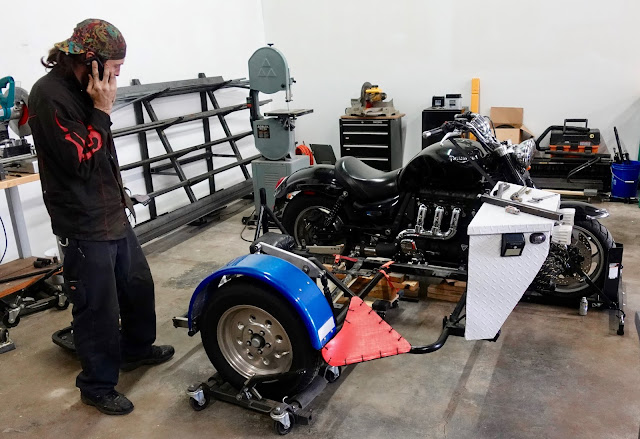 The two halves are lined up beside each other, waiting... while the TSC crew studies and designs. 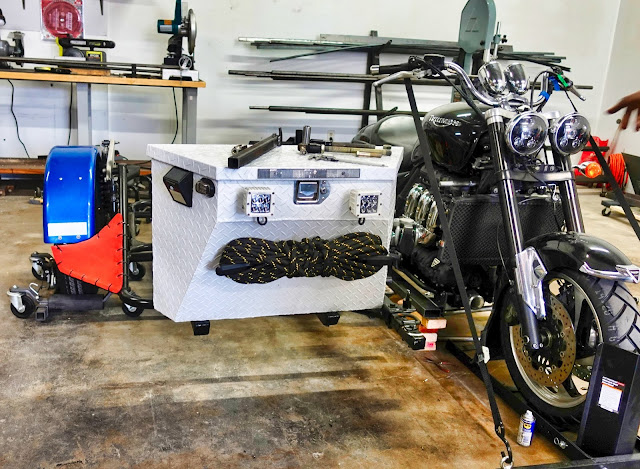 Starting low, trying a few ideas for the lower sub-frame that goes under the Rocket,
where the sidecar frame will be attached. All medium to large sidecars normally have four attachment points, two lower and two upper. This rig will have five due to the width, weight and anticipated rough roads it will traverse. 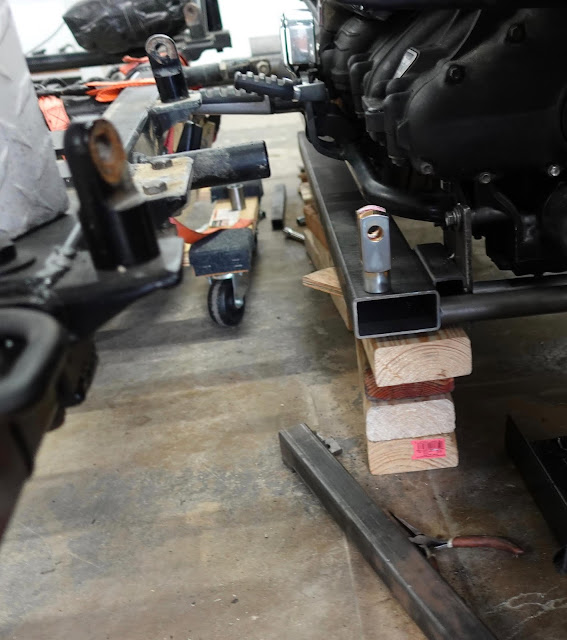 Next trial fittings for the upper strut mounts. Pieces are only tack welded at this point. Once the final design is worked out, then full blown welding will take place.

Many might think that sidecars are mass produced in modern factories. Bodies stamped out with cookie cutters, welded by robots programmed to assemble hundred of sidecars a day. In reality, every US built sidecar is a custom job. Unique to the motorcycle and to the sidecar being mounting. Then the design has to factor in the intended use of the rig. Finally it has to be modified for the weight and size of the rider.

Since I take my rigs to the more remote regions of North America, the over-riding criteria for this build is, it must be stout. Weight be damned, build strong.

Oops, looks like there is interference with the radiator overflow tank. No problem. Can fix that with a heat gun and apply slight pressure to bend the plastic back for better clearance.
Wish all mods could be as easy. 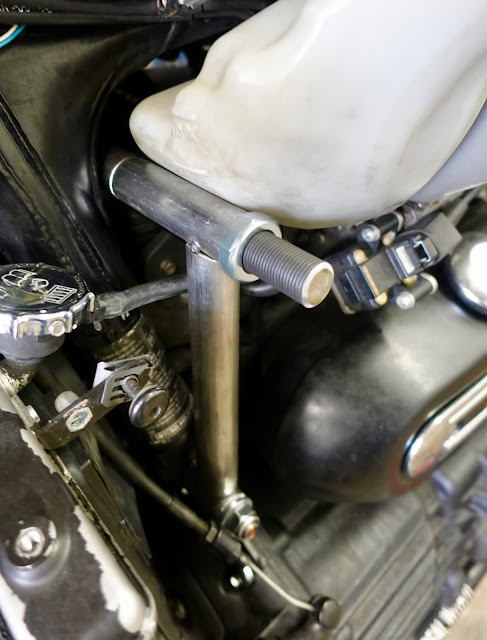 The upper strut mount design is agreed upon. Still not ready for final welding though. 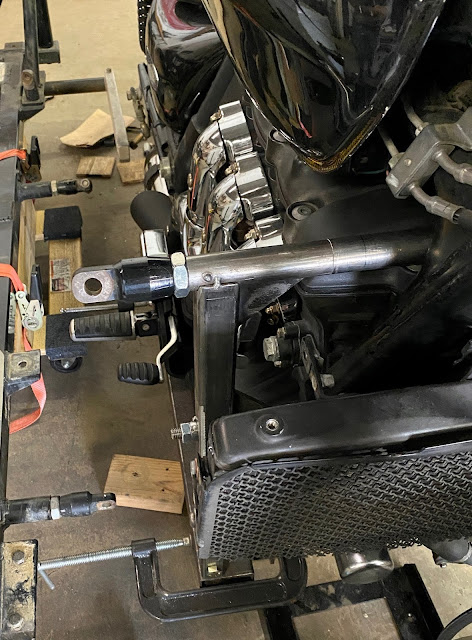 An engine guard and highway peg mounting brace were added to the left side. 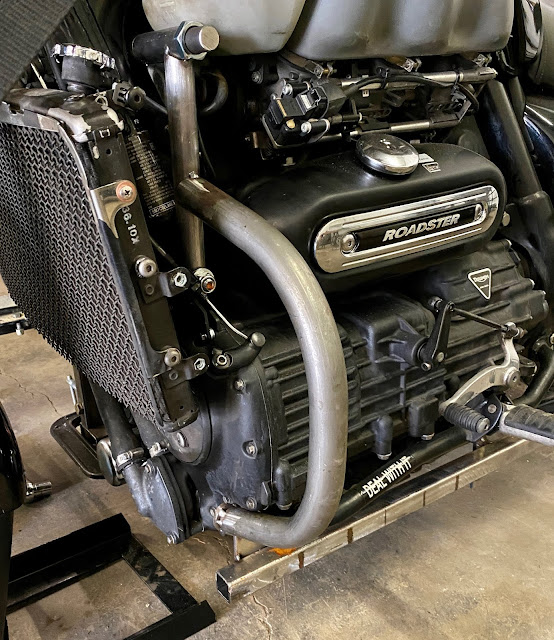 There will be two lower mounting points and three upper mounts.

Now let's look again at the lower mounts....???  More pieces of the puzzle to work out and fabricate. 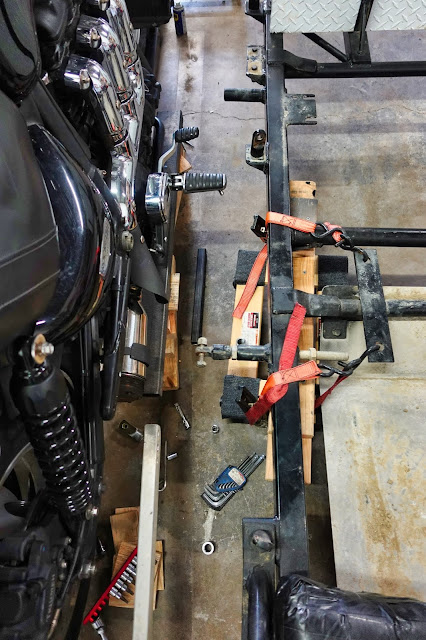 A special challenge was building a mount on the rear swing arm for the anti-sway bar.
The anti-sway bar helps keep the rig level on curves and twisting country roads. We won't be going fast but we still want all three tires touching pavement at all times. 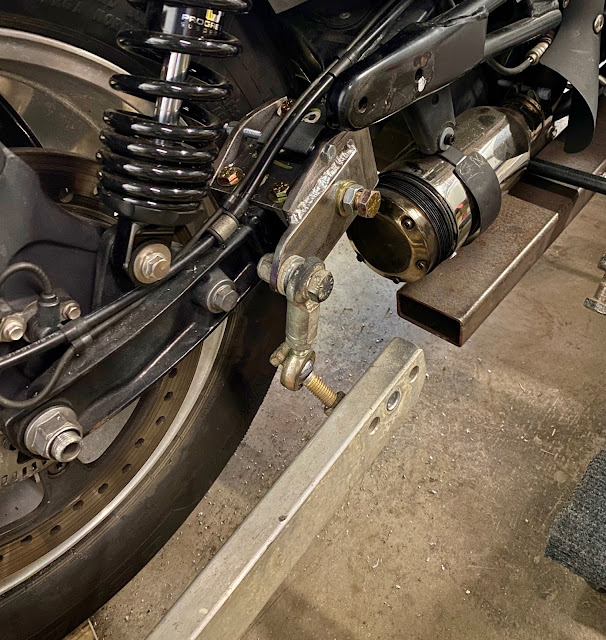 The final bracket is beefy, well built, plus looks good.
Like the rest of the new pieces, this too will be powder coated to resist rust. 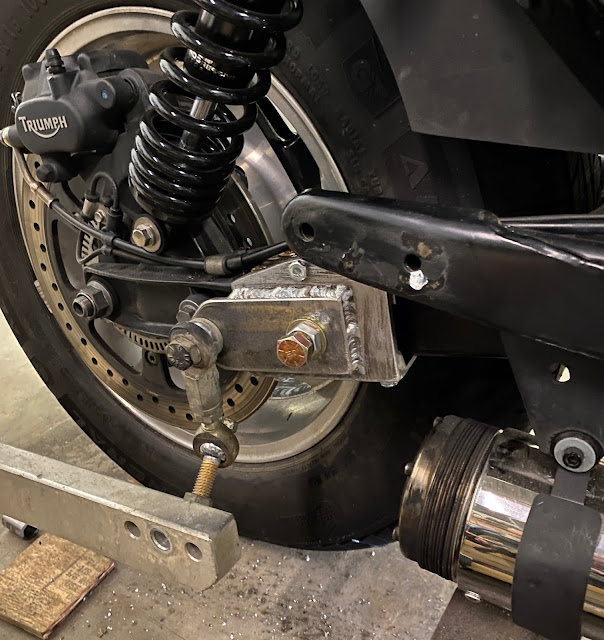 In the next photo you can see the front upper clevis connection on the new bracket and the rear clevis bolted to the rear fender sub-frame. The Rocket has a very beefy rear subframe to carry the weight of a passenger and the steel fender. That made for a strong mounting point for the rear upper strut. The third upper strut will be come off of the new forward brace. 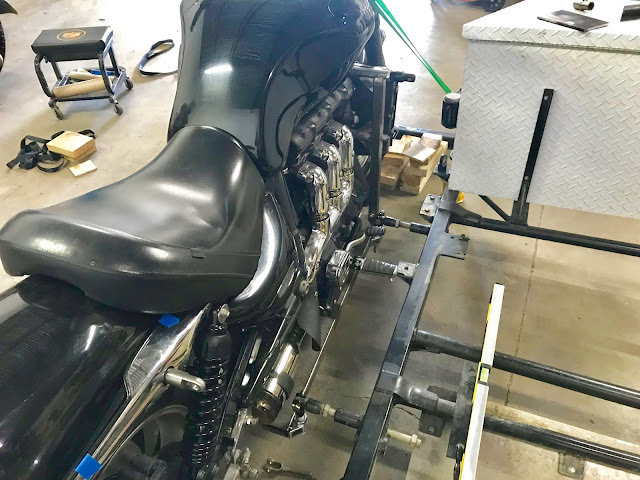 Last Saturday, after the lower mount design was finalized and welded. Other welds were added before the first trial fitting took place. All the pieces were bolted together to see if any clearance issues arose.

With every bolt temporarily in place, Kent, the owner of Texas Sidecar Company, felt brave enough to take the rig out for a cautious spin. Said it felt solid and handled well.

The first time the WARTHOG has seen the light on day. Still a long way to go before it's done, but a major step in the process is taking place here at Texas Sidecar Company. 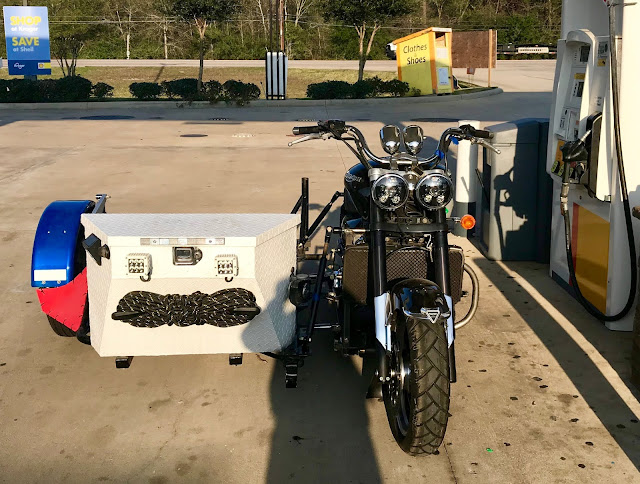 Now they will clean up the pieces in prep for the powder coating. Then re-assemble, test once more and deliver to the owner... that'll be me.

Once back in my garage, I'll start on the next phase of the project: wiring, plumbing, lighting, add accessories, install weather protection and the auxiliary fuel tank. That work will carry on through Spring into Summer.

Am anticipating a nice long camping trip this summer on the WARTHOG. Getting excited...

Staying with the sidecar theme today, a final B&W photo.

My friend Dom in Colorado has a Russian Ural sidecar that he uses to
explore trails and backroads in the Western States.

I borrowed one of his blog photos, then converted the look. If not for the jet vapor trails in the sky, this could pass for a military sidecar on the eastern front during World War II. 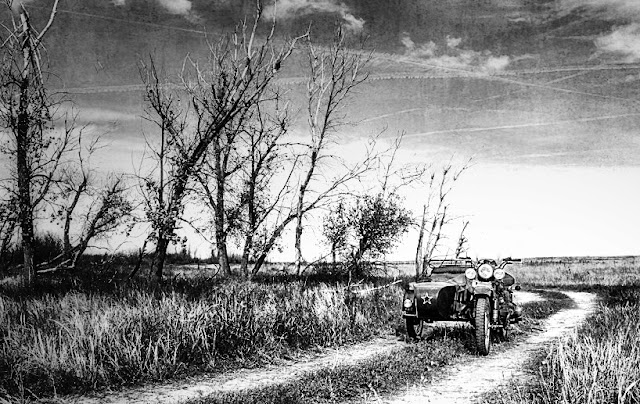 Stay tuned for more on Project:Warthog. Plus photos from an upcoming expedition to Iceland.