Hackin' South America Part #1 Getting there

Getting the rig to SA

Leaving in a cool 42 degree weather, rode the Grey Phantom 1240 miles from my home near Houston to Miami International Airport. After four days on the road, pulled the Kaswasaki KLR650 hack into the MERFLEX International warehouse in Miami, Florida. MERFLEX is an air freight agent with experience in shipping merchandise, including motorcycles, to Colombia. 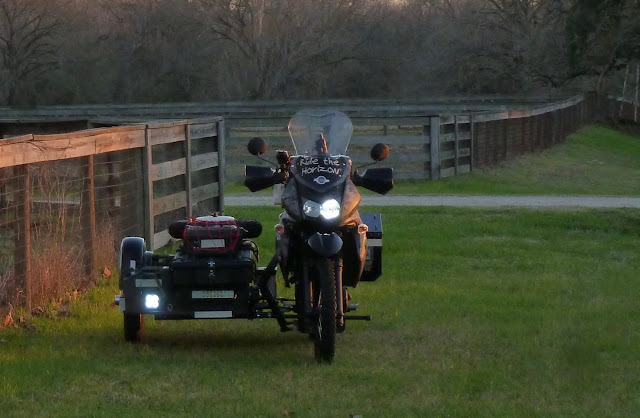 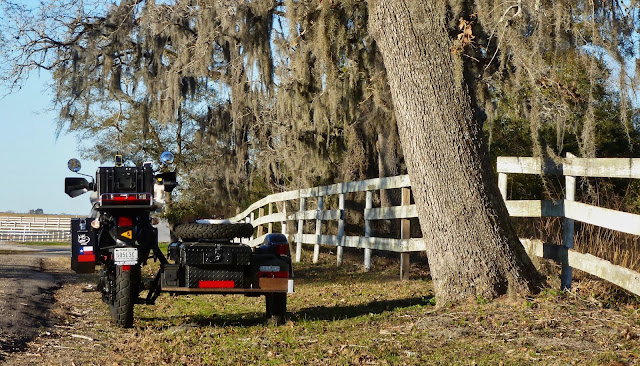 Carlos and Johana, the MERFLEX owners, will crate the bike, contract with the airlines and handle all the customs/export paperwork in the US. I plan to remain in Miami until all administrative/export paper work  has been approved and the flight date set. Then I’ll fly to Colombia to retrieve the Grey Phantom from Colombian customs and continue riding south to Chile. 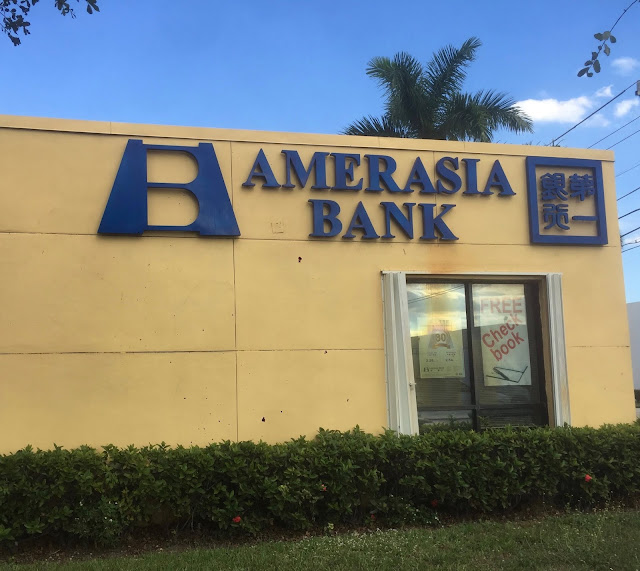 The area around the airport is very international

Why air fright to Colombia? Why not ocean shipping in a container? Isn’t air more expensive and troublesome?

Over the past three years my friend Tony DePaul and I have been trying to get his DR650 and my KLR rig down to Colombia so we could ride South America.  Over the course of those three years, we have pursued leads, ads, internet comments, suggestions, ride reports information and advice, all in vain in getting our bikes to South America in a safe and cost effective manner. 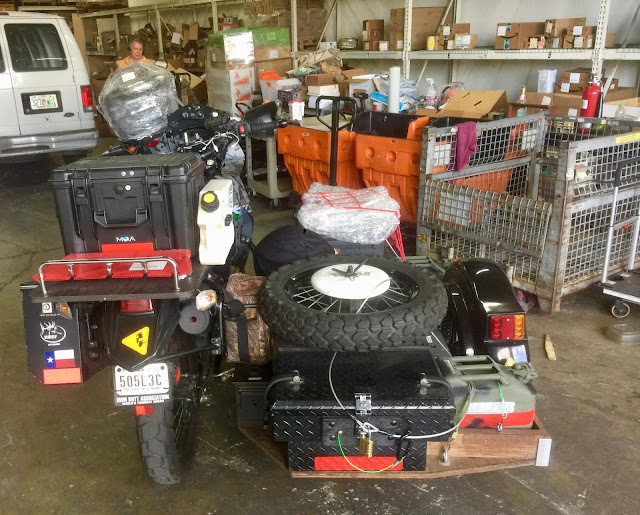 Before you ask, why are we skipping over Central America, going straight to South America? Two reasons: first, Central America is going through a lot of turmoil and political disruption right now. Two gringos on motorcycles attracts attention, too much unwanted attention to our way of thinking. Second, I had already ridden a Yamaha thru Central America when there was a shooting war between El Salvador and Honduras many years ago. You don’t have to go to a war zone to have an adventure. Been there through Central America, did it, now for something new. There several countries in South America where my front tire has not laid tracks.

Remember the seasons are reversed in South America. Their summer is our winter.  We wanted to ship in December/January to be there for their summer.

What are the shipping options? Only two: ocean freight or airfreight!

Even if you rode down through Central America to Panama, you would still have to ship your bike either by sea or by air across the Darien Gap to Colombia. There is a well-known sailing ship that carry bikes and passengers from Colon, Panama to Cartagena. But after seeing photos of the simple rigging they use to load and off-load motorcycles, sometimes into dugout canoes to take ashore, I would not trust them to handle a heavy lop-sided sidecar rig.  While not normal, there have been incidents where motorcycles were dropped into the salty drink during the loading process. 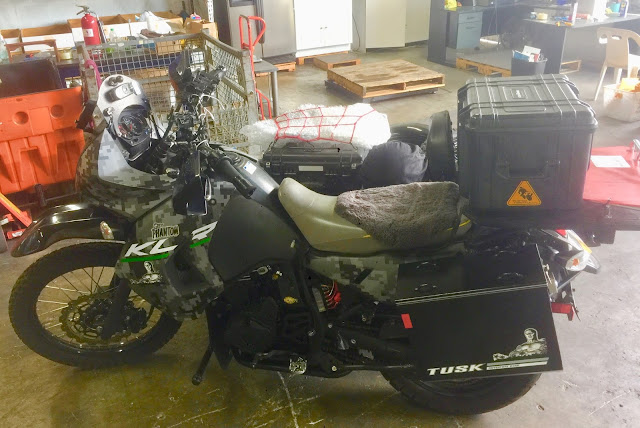 Remove windshield and mirrors to reduce size and cost to ship.

You may have heard that is the most affordable and secure way to go.  Your first hurdle will be finding an ocean freight agent who not only knows how to ship separately owned motorcycles (a complete set of documents is required for each individual motorcycle) in one container but is willing to do the complex detailed paperwork to make it happen. Living on the Texas coast, the logical plan would have been to ship both bikes from Houston to Cartagena, Colombia, and not have to take the bikes to either the east or west coasts.

Second Hurdle: We followed several leads on sharing a container with other people shipping goods to Colombia. Those never materialized.

I have used an agent to consolidate different owner’s motorcycles into one container in the past.  My experience went well, no complaints. However more recently there have been several posting about the same agent is accused of over charging, misrepresentation, not communicating promptly, not refunding deposits, etc., so I will no longer use his services.

Third Hurdle: Freight Consolidation. One can turn their motorcycle over to an ocean shipping company and they will consolidate it with merchandise going to the same port. Unfortunately shipper will not assure you WHEN your bike will arrive at the desired port. They wait until their have a full container before shipping. There are many horror stories on the internet about people trying this method. In spite of many assurances and promises of a quick arrival, riders have waited for months for their bike to reach them. Too often they are already in the foreign country waiting, paying for hotel and food, waiting and waiting.

A major part of the problem is motorcycle shipping is such a miniscule market to the ocean shipping companies. There is no priority or urgency to delivery a low profit item promptly.

The types of ships that agree to carry our bikes can be diverted from their original destination if a larger more profitable cargo becomes available. One story circulated of a RTW rider shipping his bike from northwest US to southeast Asia. The ship the bike was on was redirected while crossing the Pacific. So the ship's captan left the crated motorcycle on the dock in Tokyo.  The owner waited months until another shipper agreed to pick it up and finally deliver it. Any recourse for the rider? None.

A hurdle on the other end. While not insurmountable but a headache still, there have been many stories of delays and issues in getting foreign registered motorcycles quickly processed into Colombia through Cartagena.  While motorcycles coming into Colombia via air are quickly processed with no issues. In asking a Colombian attorney about this, he replied the laws are the same in all of the country, but the interpretation is different in different offices.  On the coast, their approach is you are importing a used vehicle. That is not allowed. You must convince them you are only transiting Colombia on your motorcycle on your way to Ecuador.

At the airport in Bogota, they assume as a foreigner, you will be continuing your ride south out of Colombia.  They assume no one air freights a used motorcycle into Colombia for import. Too costly.

There was no problem that Tony lives in Rhode Island (he could truck his bike down south in December), but… that we could not find a Houston ocean freight agent willing to find us a container and handle the paperwork. Strapping to a pallet for air freighting

Tony responded to an ad he saw posted by LANCHILE, the Chilean airlines, to air freight you and your motorcycle for one low price from Canada. For some reason the US Customs places a lot of obstacles on US carriers to transport motorcycles. So the LANCHILE offer sounded attractive even though we would have to  get our bikes to Toronto in winter. After many phones calls, we learned, LANCHILE only wanted to fly you and your bike to Europe, not to Colombia, even though they fly into Bogota.

The air cargo world is like any other business, supply and demand.  US Airlines are not going to ship a motorcycle on the same plane as they carry passengers. But trying to air freight out of Houston to Bogota proved to be one dead end after another.  Not many cargo planes fly direct between Houston and Colombia.  Which lead us to Miami.

Colombia is huge exporter of flowers to the US and Europe. Almost daily cargo planes full of flowers arrive in Miami where the merchandise is rerouted to other US cities. Many of those planes return to Colombia half empty.

When my Colombian nephew Nestor wanted to ship his bike from Bogota across the Darien Gap to Panama, he used a Bogota airfreight company called MERFLEX International.  He was very pleased with their service and pricing. They mentioned that when he was ready to ship his motorcycle back to Colombia to contact their office in Miami.

Side note: Nestor showed up at our home in Texas last summer. I agreed to guide him to Alaska. In return he offered to guide me in Colombia, Ecuador and Peru where he has many friends and contacts.  During the Alaska ride last August, Tony rode out from Rhode Island to join us in the western states.

After several phone conversations with Johana, MERFLEX ‘s Miami office manager, Nestor and I agreed we would deliver the bikes to their warehouse and have them do the necessary crating, inspections and documentation for the bikes to go to Colombia. 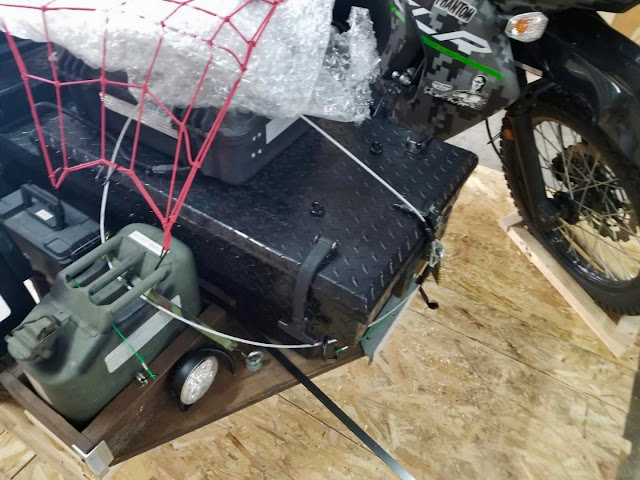 Unfortunately due to the years of delay in finding a shipping solution and a change in work demands, Tony had to withdraw from the South American adventure.  Tony is a full time working writer, while Nestor and I are both retired.  Tony can and does work from the road as evidenced by his many multi-month cross-country motorcycle rides in the US. If you have read and enjoyed the Phantom series in your local newspaper, then you can thank Tony DePaul, the writer. Recently there appeared a few new writing opportunities on Tony’s horizon. He needs to be available in the US to pursue them.  Another time and place my friend.

The bikes are crated and ready to go. Tomorrow we take the crates to the airlines for a final pricing. Then the customs processing starts.