North To Alaska with Nestor - Part #5: Recrossing the Lower 48

Parting ways in Bellingham, Nestor and I head south to Portland Oregon to meet up with our friend Tony from Rhode Island. Remember Tony working on his computer at the hot springs in Wyoming?  We rode with Tony for a couple of days when going north thru Wyoming and Montana in Part One. 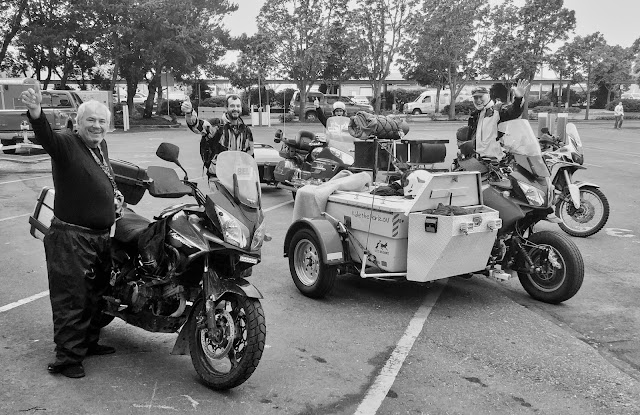 The return ride south may seem anti-climatic, but in reality was quite beautiful.  The northwest is gorgeous country ranging from heavy wet green spruce timber to vast sage brush covered valleys.

Getting thru the Seattle area traffic without mishap was a challenge. Nestor and I did get separated by the traffic... several times. Nestor's Colombian cell phone doesn't work in the States, so we relied upon WhatsApp to connect. With WhatsApp and a McDonalds's free wifi, we were able to reconnect.  By going online, Nestor could find me via my InReach satellite locator, but I could not find him. Plus I never knew if he knew where I was.  We'll find a better system to stay in contact when we ride South America together.

Tony was waiting for us at Keith and Robyn's new home just north of Portland in Washington state.
Keith, Tony and I got to know each other four - five years ago while waiting for the Alaska Ferry one rainy night in Haines.

Spotting a sidecar rig outside the Famous Halibut restaurant in Haines, I went in and met Keith from Oregon. The next day Keith stopped to check on a rider he thought was stranded. It was Tony cooking lunch at a turn out. The three of us camped out the four nights under the Solarium on the ferry.  Since then we have stayed in touch.

Two years later when I did the Iron Butt 48 States in Ten Days ride, Tony met me with an oil change in Rhode Island while Keith rode 200 miles to be my ride ending witness in Umatilla, Oregon. Unfortunately Keith sold his sidecar rig, having to give up riding this past year due to hip issues.

Keith and his wife Robyn offered us camping space in their backyard. Next morning Keith and Robyn whipped up a great Saturday breakfast before we got on the road. 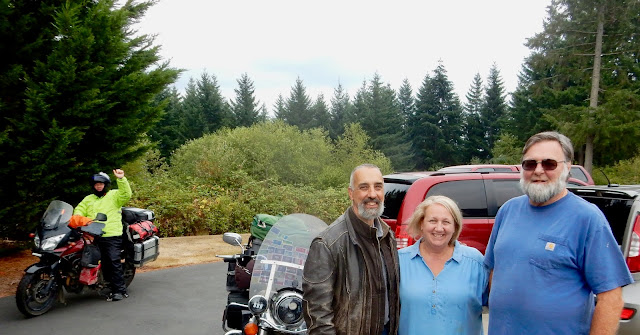 Nestor is ready to roll....

Seeing Keith's neighbor was having a garage sale, I wandered over.  Found a small one plug 12v DC/110v AC inverter and a Panasonic pocket camera, both at good prices. The inverter was put to use immediately as I was having a problem keeping the laptop battery charged while riding or when camping. The USB port won't charge a laptop. The inverter plugged into a cigarette outlet solved the problem. Well worth the five bucks I paid for it.

The Colombia River makes up most of the Washington and Oregon border east to west. Two roads parallel that river. On the south, a heavily traveled interstate. On the north side, is a narrow winding two lane road. Of course we choose the slower more scenic north side road.

As we rolled inland, there are many stretches where the Columbia River looks more like a sea than a river. It is wide with wind blown waves moving inland rather than flowing out to the ocean. Seeing the waves move inland and the blue color of the water gives the appearance the water is flowing away from the ocean and not toward it.

Being a weekend, a lot of people were out enjoying the late summer weather. From a distance we saw these colorful kites in the sky, wondered what was going on. 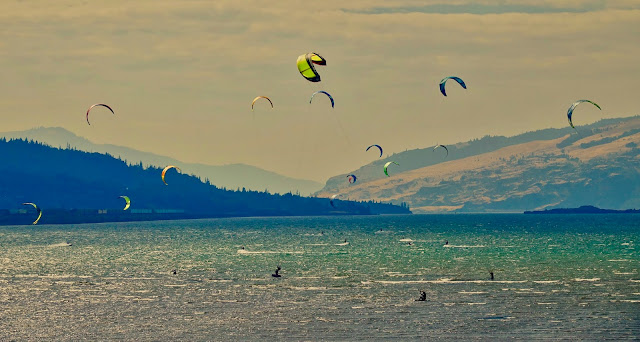 By the number of people gathered, appears this river sandbar is a perfect launching point for kite surfing and sailboarding. 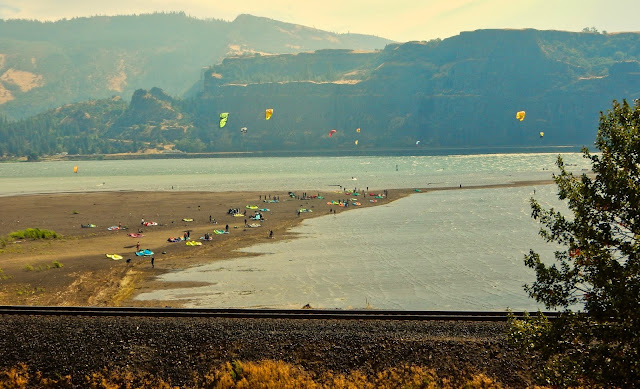 The train tracks closely follows the north side of the river as does the roadway we are on. There are numerous tunnels when there was no room to lay tracks. Note the color of the river, ocean blue. 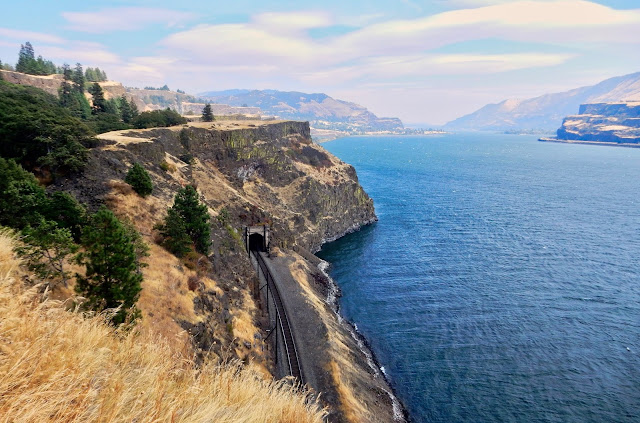 Tony shades his camera while checking the settings. We both enjoy travel photography. 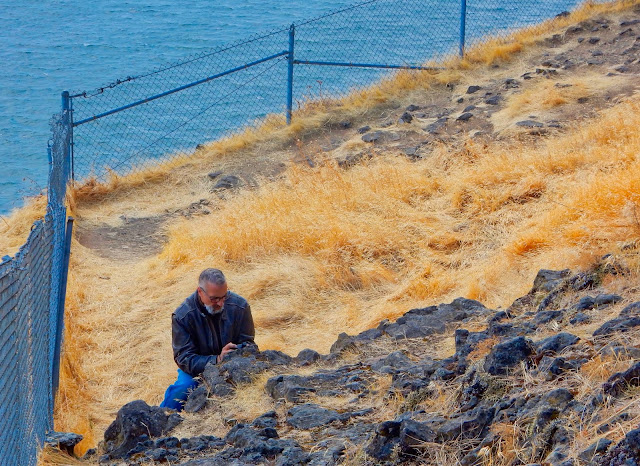 We end the day at the Corps of Engineers Plymouth Park campgrounds in Plymouth, WA, across the river from Umatilla, OR.  Five dollars a person to camp. Soft green grass, shade trees, picnic tables, facilities, no muddy parking area, aaaah comfort! 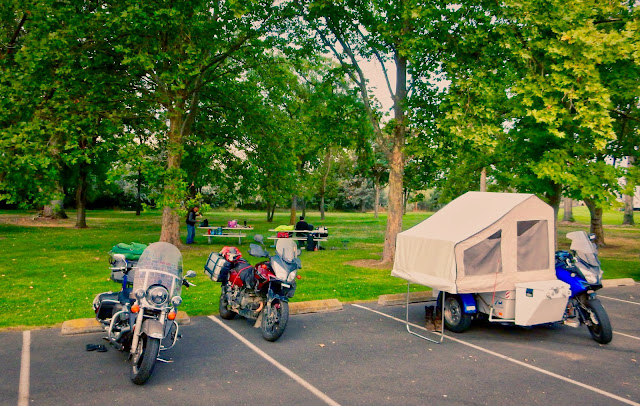 Returning to the Beast after a stop at Walgreens, am shocked! It appears Beast has wet himself. Separation anxiety? No, but it's not oil or gas either. Is only ice water from a fallen cooler bag.

Between the weld patch and the ratchet straps, the Beast is running smooth and tight. As my confidence grows so does my speed.  Even with that extra large camper tub hanging out in the wind, the Beast can still cruise at 65 - 70 mph. 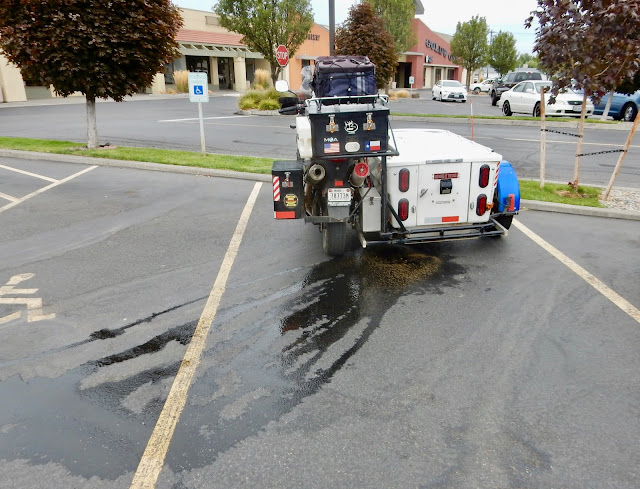 We had an unusual experience in how people think and act. At a rest area north of Umatilla, an older lady drives up and asks Tony if we are heading to Spokane or Coeur D'Alene. "Yes, we are".
She explains that she accidentally took her grandson's only truck key when she left this morning on her way to Portland. Would we mind taking the keys back to Coeur D'Alene and give them to her grandson? She would call her daughter and grandson and let them know we were bringing the keys back. Tony agreed to be responsible.

When asked why she picked three grey beards on motorcycles to trust for this task, she responded:  'My son has a Harley, so I KNOW Harley riders are safe and responsible....... "
Tony comments later that she must not have heard about the 1%'ers.

On the flat wheat fields west of Spokane, we wait for another long train to pass under a grey sky. 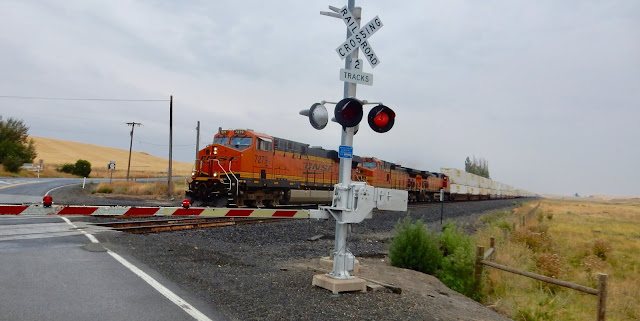 The day was raining off and on as we head northeast toward Spokane to meet Tom Wells, the Washington State United Sidecar Association Rep. Tom has two Harley's with sidecars.  As a well traveled HD rider who does all of his own repairs and maintenance, Tony admires the rigs.

After a warming cup of coffee with Tom, we ride over to Idaho to meet Sidecar Billie and David Irving. David is the Northwest Region Director and Billie is the Idaho State Rep for the United Sidecar Association. The 2019 USCA National Rally will be in Coeur D'Alene, Idaho in July next year. Billie, David and Tom are the rally hosts. 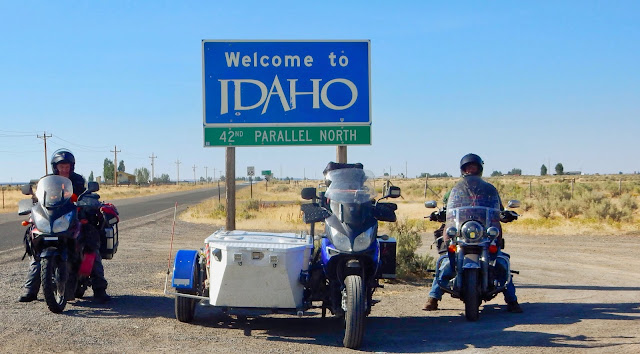 Note: I know, this is not the sign one sees when crossing from Washington into Idaho near Coeur D'Alene, but the traffic that night was so busy I could not safely stop for a photo.

After delivering the grandson's truck keys in Coeur D'Alene, we arrive late at David and Billie's home. They offer up a spare bedroom which Nestor accepts. After a month of constant use, Nestor's tent is not so waterproof anymore. Tony opts to pitch his tent in the backyard... in the rain.
Me? I pop up the Beast's camper...  in their dry garage... far from the cats inside. 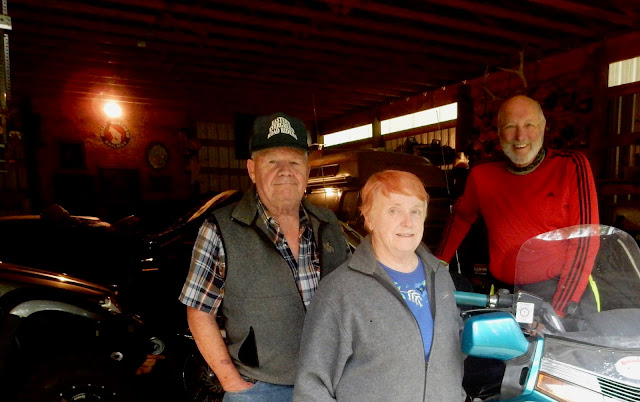 Looking at the map, David recommends we follow US Route 95 south toward Nevada.
Great advice as the ride was spectacular.

Below, by midmorning low hanging clouds slowly rise,
exposing the golden hills and ridges of western Idaho underneath. 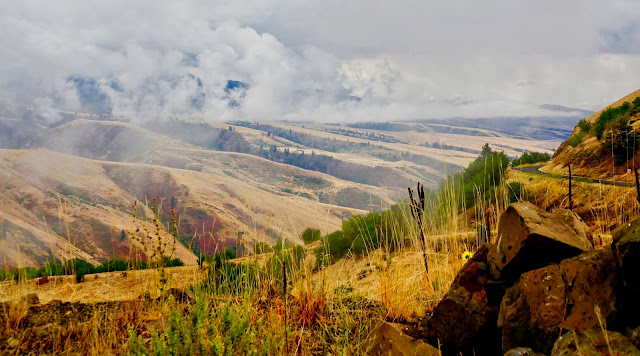 The Beast looks ungainly and woefully unbalanced here, but the two boxes on the top rear are for light weight items only. The eight gallon fuel cell rides directly over the rear tire, also acting as a back rest. All the heavy tools and parts are carried forward in the white tool box in front of the camper to counter balance any weight on the rear. Looks very off-balance but the front tire feels planted, never light or twitchy even on uneven roads.

The red string hanging from the tank bag is a tether for the camera in case I drop it while taking photos from the seat of the Beast. Taking quick photos with leather gloves on can be awkward. 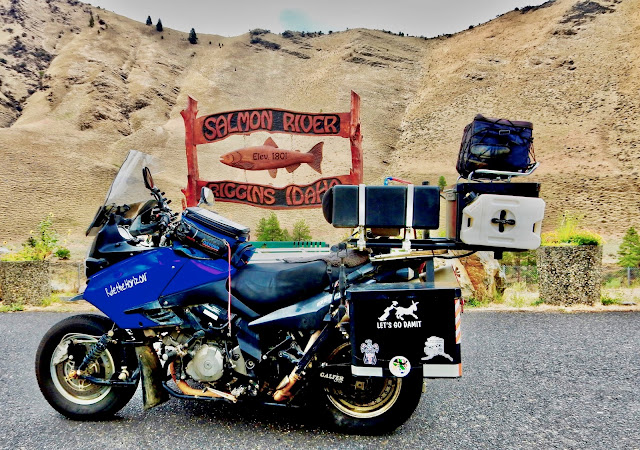 Near Riggins, Idaho we spot a large encampment near the Salmon River...  is a firefighters base camp and support area. This summer many parts of the dry windy western US and Canada have had to deal with fast spreading forest and brush fires. Thousands of acres have been scorched.

From Mountain Home, Idaho, we ride the flat Route 51 south to the Nevada border. 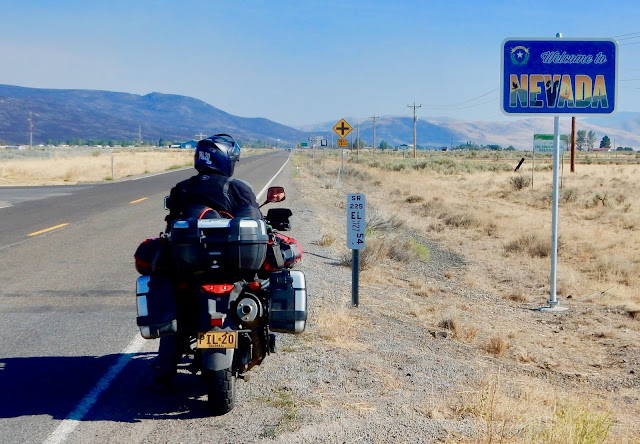 In the distance we have our first sighting where brush fires have scorched the land.

The valley floor is still green for cattle, but the hills beyond are blackened.

In many places the road serves as a the fire break, stopping the brush fire from crossing to the other side. But when the wind is strong, the wind driven embers easily jump across the roadway, igniting more dry brush. 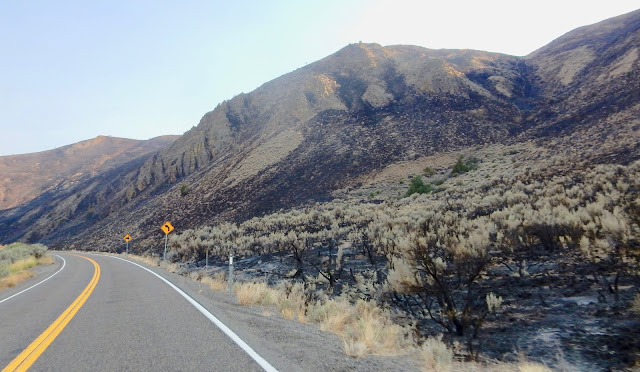 Here are a few photos of a Nevada roadside rest area that was wiped out by a fast moving brush fire. 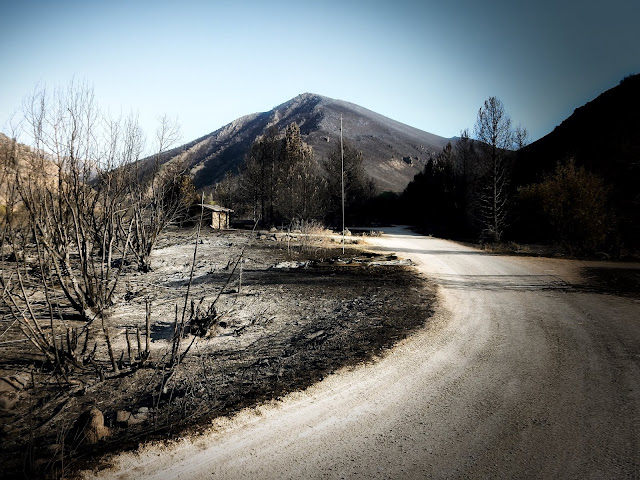 There was no color left to capture in a photo. Only grey and black remains. 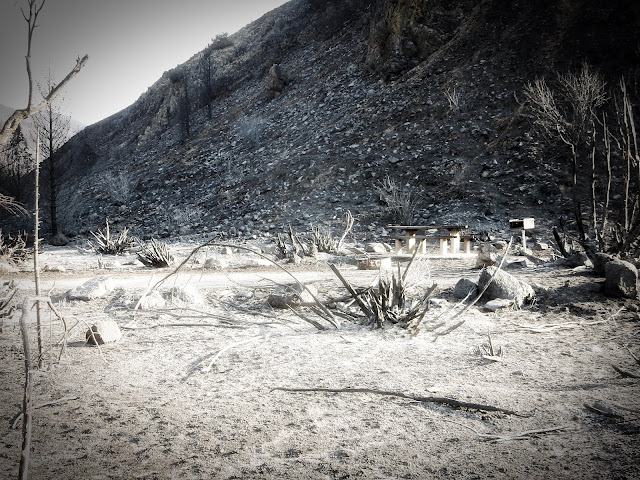 This was the first day of re-opening this particular roadway after being close for weeks due to the rapidly spreading fire. 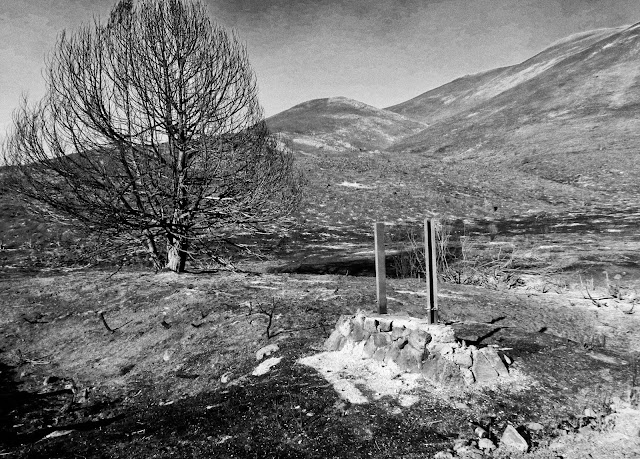 By nightfall we locate a turn out on a small dusty hill untouched by fire. Talking with a local rancher, he informed us this particular fire started seventeen miles west of our location and has burnt thousands of acres. While now mostly contained, there were still a few hot spots yet to be extinguished.

Tony covers his Iron Piggy for the night. 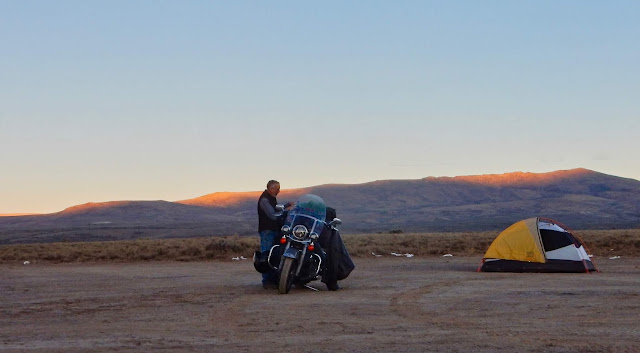 Next morning we can see one active hot spot high on the ridge. Raw raspy throats and itchy eyes affect us all as we ride through a smoke covered roadway. 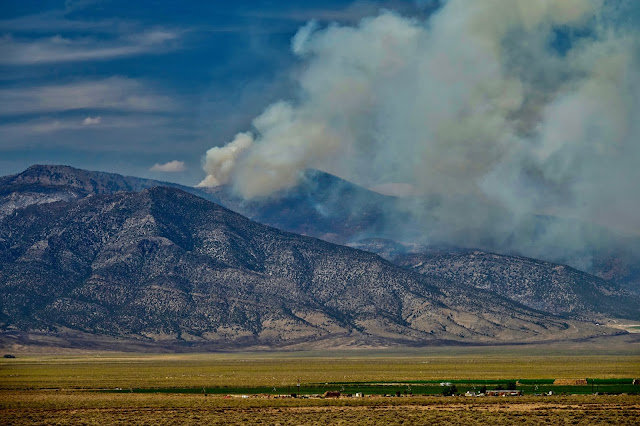 After the green forests of Idaho and out of Nevada's fire area,  we are now rolling across a wide open sagebrush valley. This particular area has gotten some rain as evidenced by the green scrub brush. 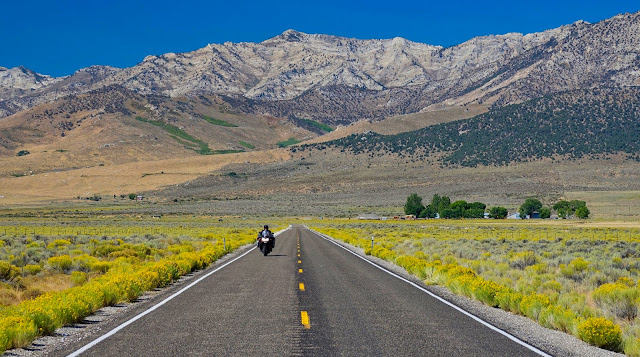 Yet a few miles further south, the lack of rain dries the grasses and brush,
creating a potential fire hazard. 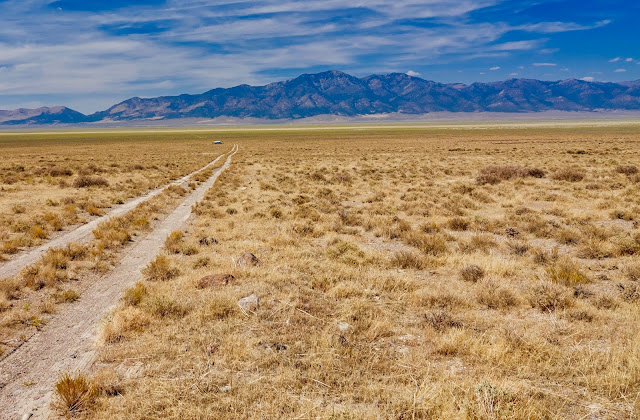 After Nevada, Utah...  then on to Arizona and New Mexico, we roll. 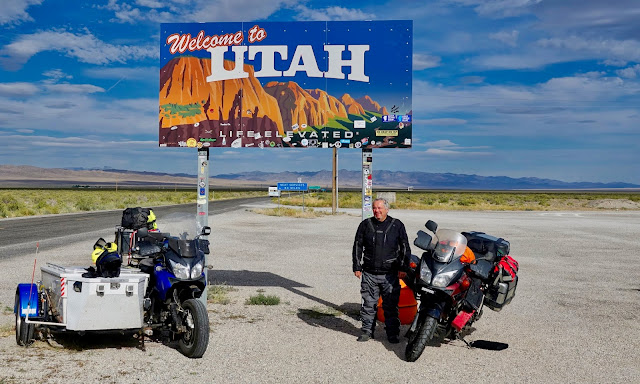 Anxious to get back home, we cross into northern New Mexico heading for Angel Fire
to spend a few days resting.

Overlooking the wide valley near Tierra Amarilla, NM, only a hint of smoke haze lingers in the sky. 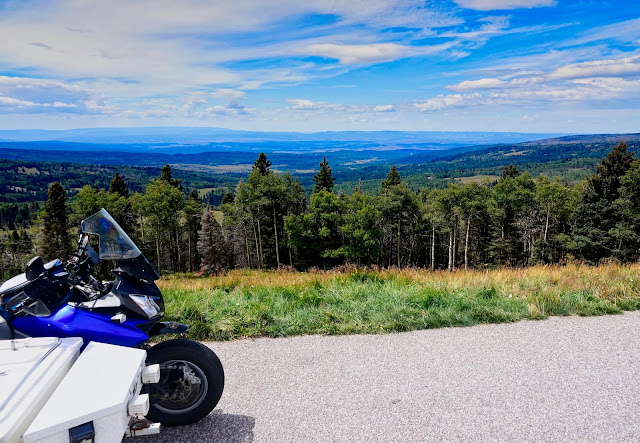 In Angel Fire, we take a couple of days off to rest before the final push back to Texas.
Thus concludes the story of Nestor's Alaska Ride.

One man's goal is achieved. Ride all 18,000 miles of the PanAmerican Highway from tip to end. Nestor has accomplished what many only dream of doing but few actually do. Nestor commented that this blog's theme inspired him: Many want, some desire, but few do.

Nestor has done it!    He is one of the few!   Congratulations!

Thanks for following along.
Ride safe my friends,