North To Alaska with Nestor - Part #1 Southwest US

The phone rang in early July, my nephew Nestor Pinilla from Bucaramanga, Colombia called to say he was in San Antonio, Texas. He had ridden his Suzuki Vstrom 650 up thru Central America and was coming to visit us. 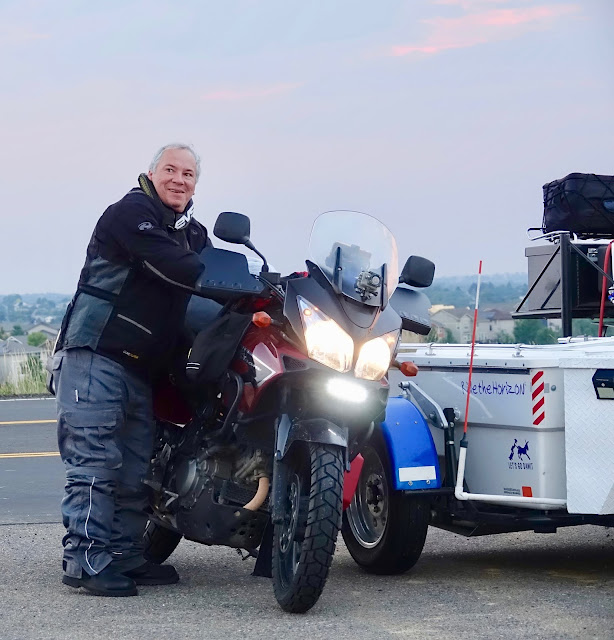 " Fantastic Nestor, come on over to Houston "

Nestor is the only one on the Colombian side of the family who rides a motorcycle. In fact he rides so much he has seen all of the PanAmerican Highway from the southern most tip of South America north, up thru Central America and is now in Texas.

As we visited and caught up on family news, I casually asked if he still wanted to see Alaska. With his positive reply we quickly put in motion everything we would need to prep both motorcycles for a northern trek into the frozen Arctic regions. 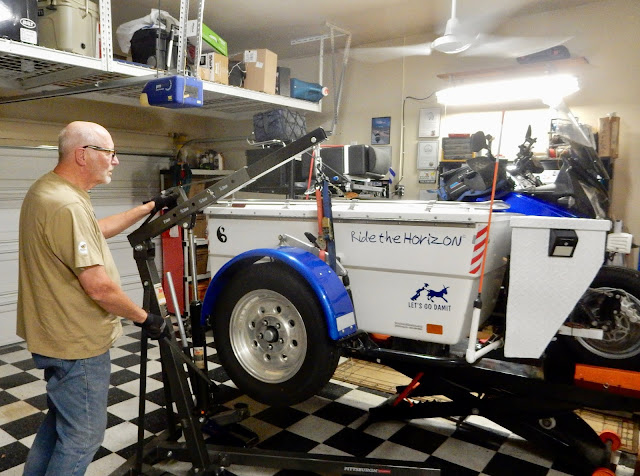 Nestor would ride his Vstrom and I would take the Dam'it, the sidecamper.  Though now the name Dam'it has been retired, as when Nestor first saw this huge sidecamper, he exclaimed,
"IT'S A BEAST".

Well, it is. I liked Nestor excitement so much the sidecamper now carries a new moniker, The Beast.

The Beast has been mostly repaired from it's trip on the Trans-Labrador Trail and eastern Canada, but she still needed a few maintenance items attended to before taking on the northern challenge of Alaska. This would be my fourth trek on the Haul Road with a destination of Deadhorse, so I knew what to expect and wanted to prepare the rig for the worse.

Getting Nestor his Canadian VISA proved to be a challenge, taking three weeks of diligent daily phone calls and paperwork.  On July 29, with VISA in hand, we trailered our two bikes to the condo in northern New Mexico in one day. If we had ridden in the 90+ degree heat and high humidity, it would have taken us two or three days together there. 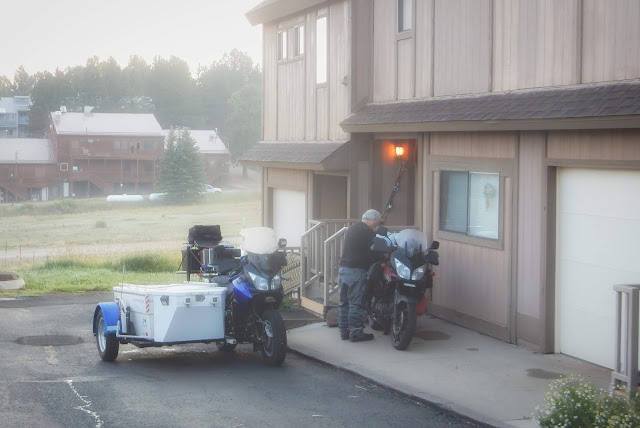 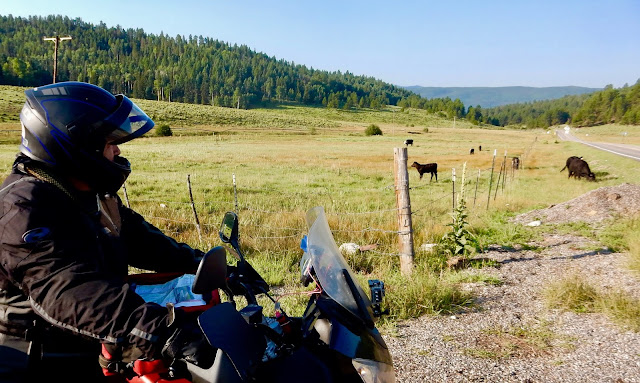 Not twenty miles into the first day, we come across cattle who had escaped from pastures, wandering across the road. This is not an open range area. They should not be grazing roadside with vehicles whizzing by. 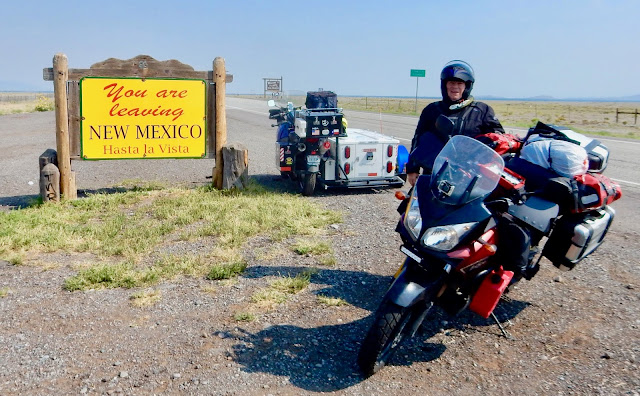 Rolling north from the town of  Tres Piedras, we leave the high plains of northern New Mexico
"Hasta La Vista" Baby.... and enter... 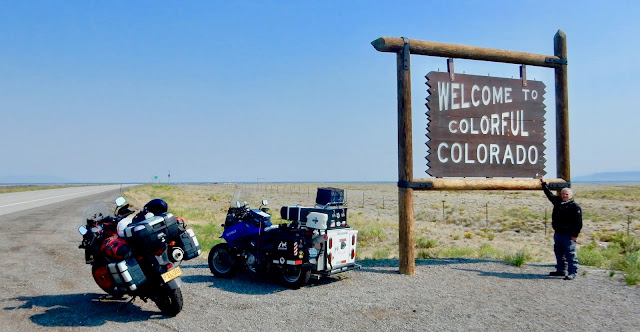 ...the high plains of south-central Colorado. Pretty uneventful, for sure!

Our destination this day was to reach the home of a old friend, Dom Chang, a URAL rider in the Denver area. 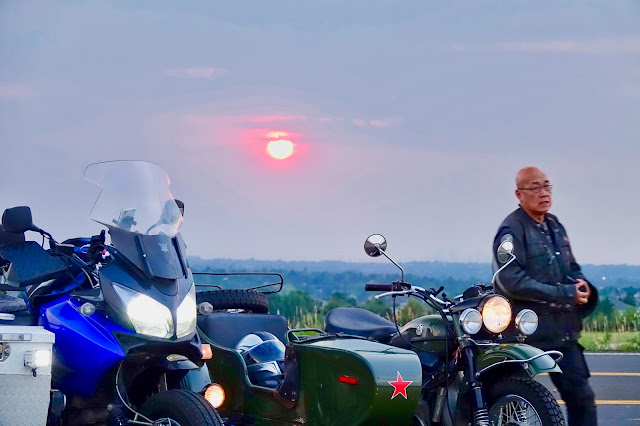 Dom and his wife Martha had invited us to spend the night in their home.  Yes folks, cross-country motorcycling is a rough tough life.... lol.
Dom grew up in Honduras so he and Nestor had a great time conversing in Spanish.

Dom took Nestor and I out to his favorite photo spot overlooking the Denver skyline and the Rocky mountains beyond. Unfortunately the haze prevented us from seeing peaks or ridges far in the distance. 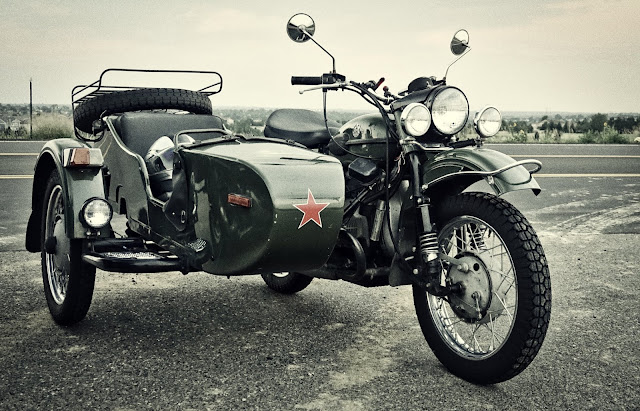 This is one of Dom's pride and joy's, a BMW powered URAL sidecar rig. He even allowed me to test ride it. Definitely more power and smoother than the URAL factory engine.

The next morning Nestor and I visit the famous hole in the rock road north west of Denver. 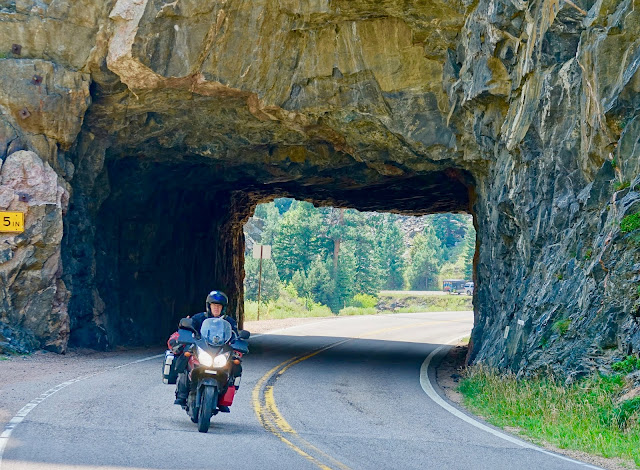 Crossing into Wyoming we spotted many herds of these creatures... 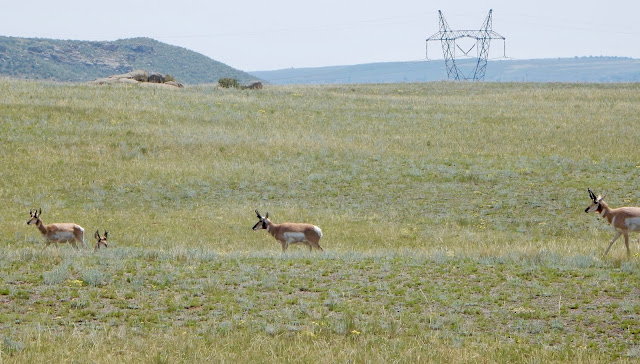 ...the American Pronghorn Antelope. This is one of many firsts for Nestor on this trip.

By nightfall we are in central Wyoming looking for a place to camp. The rest area I had in mind is now posted with "No Overnight Parking" signs.  Moving on...

With a fading light I lead Nestor down a dusty country road, where we pitched camp a couple of yards away from the gravel. The hills will block any highway noise and prevent anyone from seeing where we are or bothering us.

Only the coyotes were aware of our campsite and made their presence known,
yipping and howling as we drifted off to sleep.

At the break of dawn we were up and packing. A hot cup of coffee and a granola bars would tide us over till lunch time. 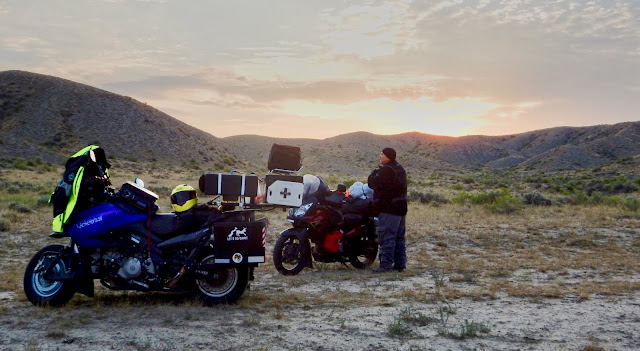 Many inn and motels in the smaller western towns just never made ends meet, closing without finding a buyer when the owners wanted to retire.  The Tumble Inn in Powder River, WY is one such inn. 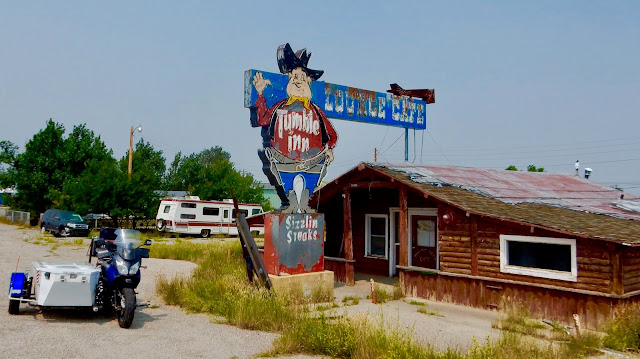 In Glen Rock, Wyoming, we meet up with another old friend, Tony DePaul from Rhode Island. Tony rode all the way out west to meet and ride with us for a few days. Tony, Keith Hackett and I met several years earlier while waiting to board the Alaska Maritime Highway ferry in Haines, Alaska. (Remember that name, Keith will reappear later in this story).

Remaining in touch over the years, Tony and I have even talked about riding South America together. Nestor has now volunteered to guide us when we get down there. Hmmm, sounds like a new ride plan is coming together....

By the time we reach Thermopolis, WY, the idea of camping and then soaking in one of their famous hot springs is an irresistible draw.  Unfortunately the State Park does not allow camping or overnight parking, according to all the posted signs. Drat all those posted signs!

Mulling over our options, I tell the group it is time to reach out to "my people' for a solution.  Riding to the center of downtown Thermopolis, I locate where my people gather.... 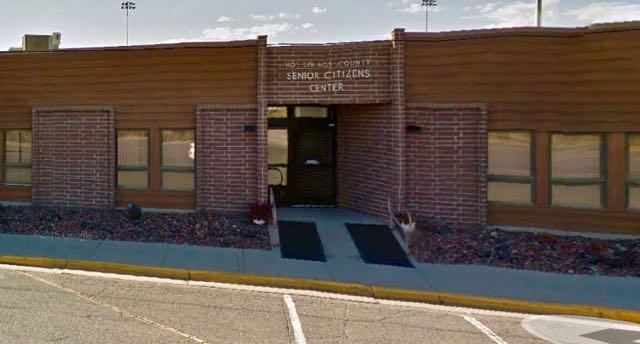 Inside two sweet little ladies inform me that there is a hot springs RV campgrounds just beyond the town limits where we can pitch our tents and enjoy the thermals.

Thanking my people for their help, we point our bikes toward the ridge on the north edge of town. 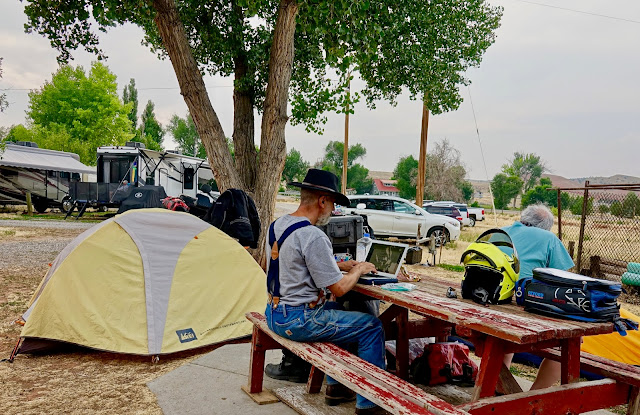 For $15 each at the Fountain of Youth RV Hot Springs Park, we had a large campsite, picnic table, WIFI, showers and a hot springs pool where Nestor and I soaked our aches away while Tony pounded out work on his laptop.

Nestor, the youngest of the group is retired, me the oldest, semi-retired and Tony in the middle, still working. There is a twenty year spread in our ages from the youngest to the oldest. We all get along, no ego problems, no prima donnas, we all three enjoy experiencing the open road on a motorcycle.