One is the front brakes. After removing the front wheel, replacing the bearings and mounting a new front tire, the brakes do not want to grab with any force. The previous owner rode this rig on the beaches in Mexico, which may be the reason the brake pistons acted like they are stuck. Ordered a replacement set of clean used brake calipers off eBay.  Learned that the brake calipers on this bike are not OEM Suzuki Vstrom 1000, but are from a Suzuki Hayabusa, a very fast high performance crotch rocket.  From the original eight piston brake calipers, this rig was upgraded to twelve piston Hayabusa calipers for better stopping power?  Speed is not an issue with this rig, but stopping the rolling weight is. 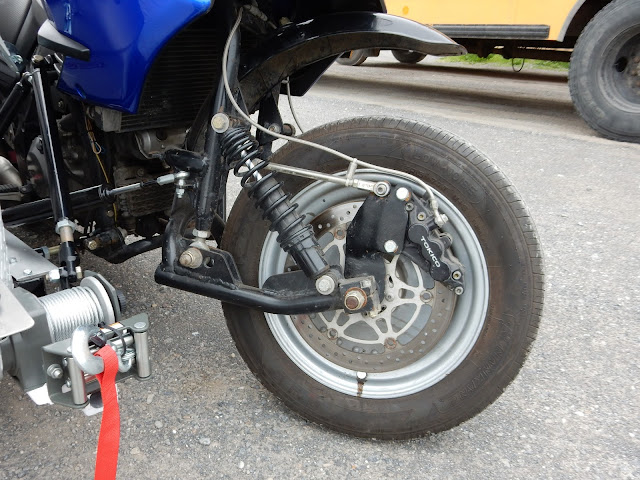 The tools of the trade for brake bleeding. 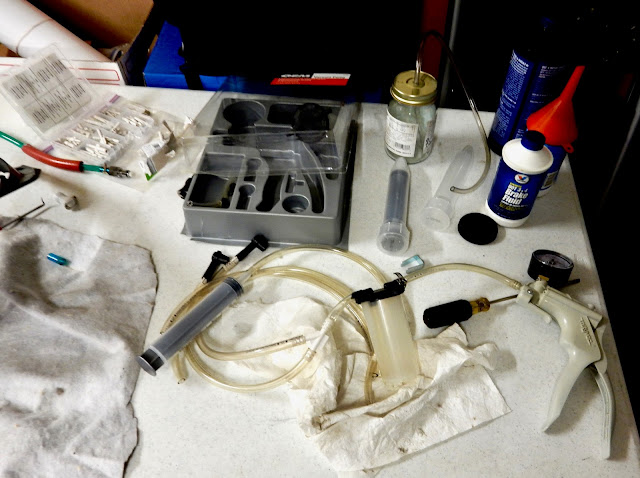 Installed the eBay replacement Tokico brake caliper. Looks better, but still not grabbing like they should. 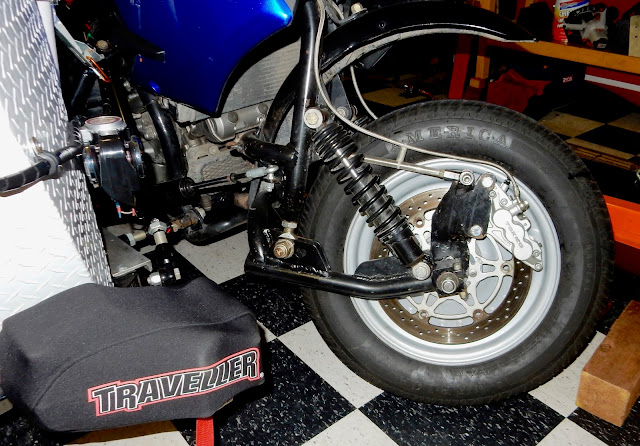 After bleeding the brakes several more times, removing all the air with both forward and reverse bleeding procedures, cleaned the pistons and calipers, but still mushy feeling when I pull the front lever.

Finally ordered a front master brake cylinder rebuild kit from eBay.  Hopefully by next week the brake issue will be resolved.

The second issue was the fuel gauge. It was not working correctly when I bought the bike. No matter how much fuel is in the tank, it always read empty. Tested the resistance of the float unit while in the tank, then the wiring and finally the instrument cluster. We spent hours and hours tracing the wiring on the bike, taking ohms reading at every junction. Everything had a good reading, no breaks or shorts found.  Decided to order a replacement instrument cluster as that was the one part we could not test.

Here the old cluster is out, waiting on a new one to arrive. Installed the new eBay cluster but same problem occurred, fuel gauge reads empty.  We can't have two bad clusters, can we? 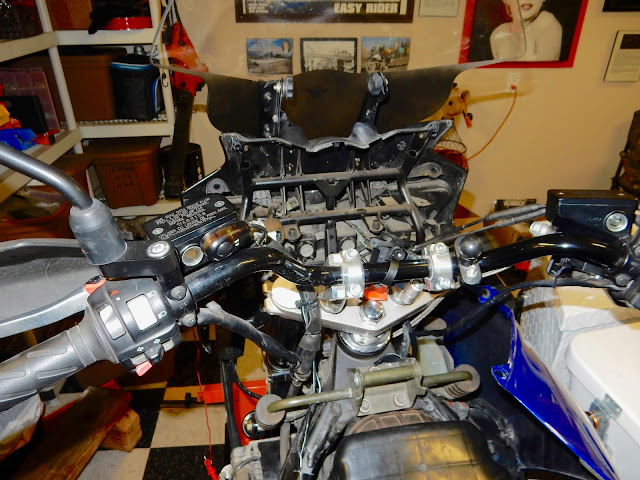 Next removed the fuel float sending unit for testing outside the gas tank. The voltmeter reading says the ohms are correct when I move the float up and down. However when  it was inside the tank in the gasoline, it would give a reading, but not change much when one rocked the tank. 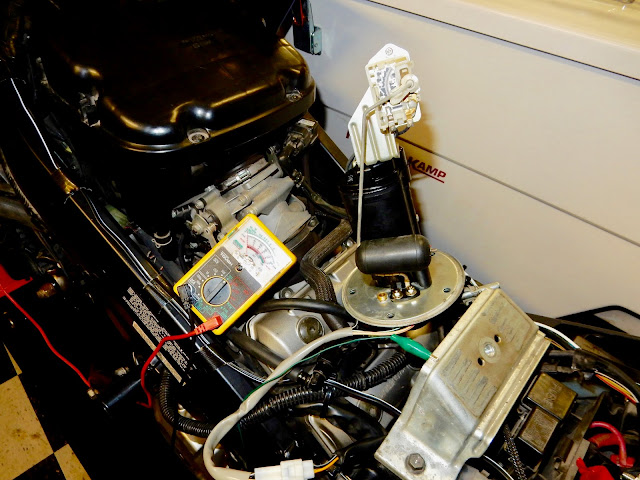 Finally ordered a new float assembly.  Installed the new sending unit. BAMM... Problem solved. Now the fuel gauge is showing the correct fuel level.  It is critical that the fuel gauge accurately show how much fuel is in the bike's tank so when I refill from the 15 gallon auxiliary fuel cell I don't create an overflow problem.

Here is the new 15 gallon auxiliary fuel cell mounted on the swing out table so the weight is carried over the sidecar axle. It gravity feeds into the main fuel tank on the bike when the manual valve is opened. Fifteen gallons is a lot of weight, so I don't plan on filling it completely until I am about to enter the more remote desolate regions.  I have yet to learn what my miles per gallon will be. A long road trip will tell me that.

Added a map of Canada on the back and a map of the USA on the front of the fuel cell. The goal is to fill in all of the states and provinces on those two maps over the next several years. 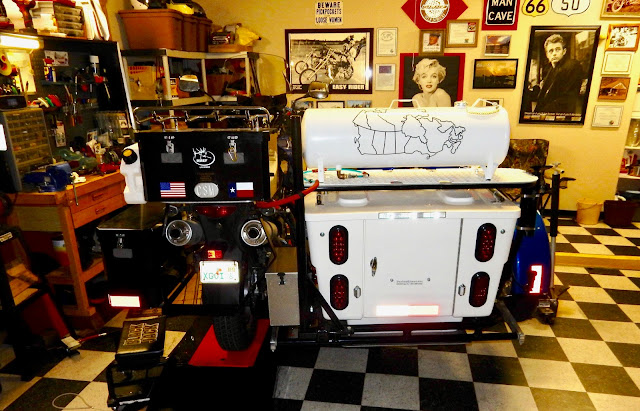 Took the rig off the lift and opened the camper in order to rewire the taillights and add a right turn signal lamp. 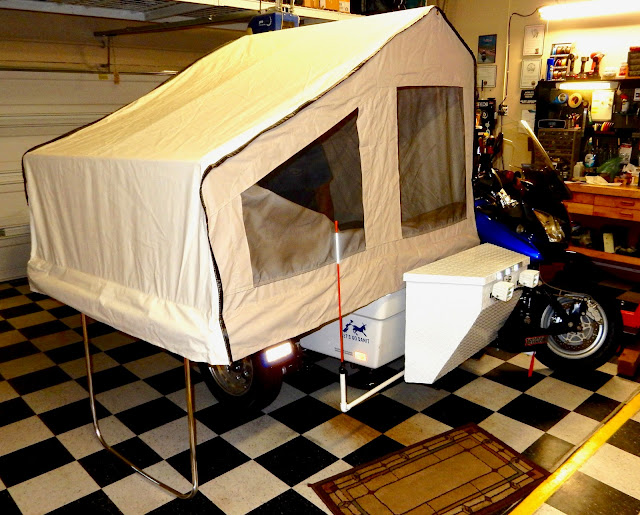 Also need to decide what and where to carry items inside the camper.  Still have to build storage compartments, add a drop down table, a light and an outlet for charging my laptop.

While the inside of the camper is waterproof when closed, nothing is accessible when the top is closed and secured for traveling. So all rain gear, cold weather gear as well as tools and camera gear need to be packed and stored on the bike somewhere, not inside the camper. 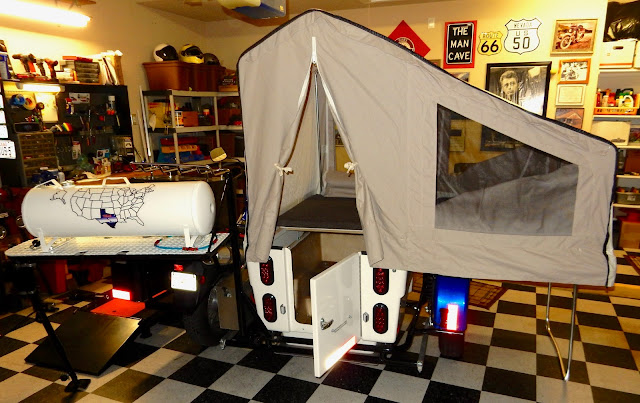 The back door cannot be opened with the top is closed. In order to open the camper, the fuel table swings out and a drop down leg is lowered to support the loose end. The camper top is then flipped out over the sidecar fender onto its supporting legs to expose the interior. Then the door can be opened to step in and push up the two metal frames that support the canvas  roof.  Sounds complicated but it only takes a few minutes to set up.

After a slow last week, we are seeing improvements.  Slowly but surely the project moves toward completion.

Am anxious to get this rig on the road for a long test ride, Canada waits.