Several years ago I saw this photo of a sidecar rig that captured my attention.  Egads1, an AdvRider in Georgia had mounted a pop up camper in place of the chair as a sidecar on his motorcycle. Immediately I thought what a great idea for exploring Canada and Alaska. One can stop and spend the night wherever they desire. Sleep up off the cold wet ground and easily carry all of their clothes, camping, cooking,  photography gear with them.

It would be a bit crowded for two people, but I travel alone. Would have a weatherproof storage space for all of my gear, sleeping bag, cook stove, etc. The ceiling height inside is 6'2", a little short for my 6'5" height, but much better than a 4' tall tent. 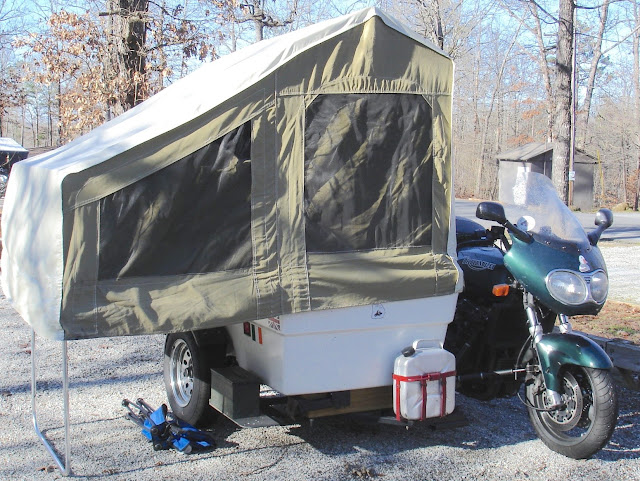 Knowing how expensive motels are once you head north, one can save money to buy more gasoline. Plus one has the freedom to sleep anywhere, be there for sunrise or sunset photos in the wild.

For months I researched the various models of lightweight motorcycle camper trailers, only to arrive at the same conclusion as Egads1, the Kwik Kamp Mini-Mate camper is the only model that would work as a sidecar. The top is hinged on the right side so when opened, the top is folds out over the sidecar wheel. Some other model's tops open to the left or both to the left and the right. With the motorcycle handlebars on the left, any top that opened left would not work.

The Mini-Mate feature that really caught my attention was, it can be set up in two minutes. Putting up a tent can take ten - twenty minutes. That may not sound like a big difference, but if it is raining, you and your gear are getting soaked while setting up a tent on the cold wet ground. Then to unload your gear, storing it in the tent, and finally crawl yourself inside. Then if you set up your tent in the wrong spot, you could have water running thru it and sleeping bag in the middle of the night. All of that can avoided with the Mini-Mate.

With the research done, now to find one. The Mini-Mate is sold as a pull behind camper, small and lightweight, easy to pull by motorcycle or small car. Tried looking locally and on various internet sites but none showed up on any of the motorcycle travel camper sites or internet auction sites.

Finally I ordered a new Mini-Mate direct from the Pennsylvania factory. Had it shipped to Texas where I bolted on the axle and tongue so I could wheel it around in the storage area.  It is quite large and takes up space. 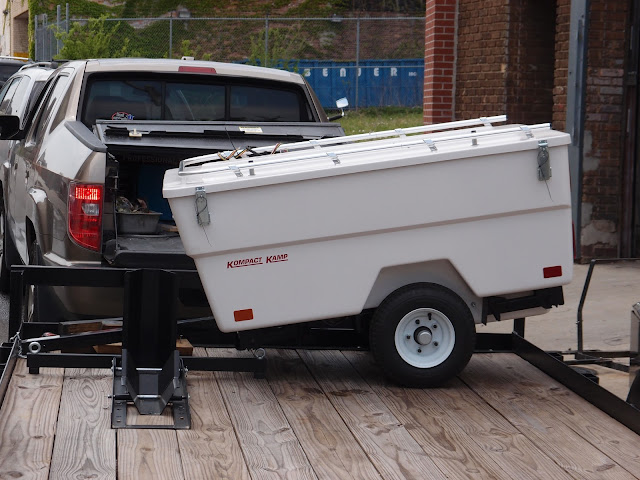 With the camper in hand... what motorcycle do I mate it to? I did not have a motorcycle or sidecar rig that would be a good match for this camper. Egads1 told me that riding the camper rig was like pushing a wall of air with that flat front so your motorcycle better have power and torque.

Back to searching the internet, for a strong reliable motorcycle. I finally located a heavy duty adventure sidecar on AdvRider already set up for world travel: a 2007 Suzuki Vstrom 1000 converted to ride on three automobile tires and a winch. The Vstrom 1000 has a reputation of reliability and strength with its 100 horsepower engine. Freedom Sidecars in Pennsylvania had originally converted it to sidecar duty.  SLACKER, the owne, had the rig for sale in Baltimore, Md. He and his wife had just returned from spending several months touring around Mexico on it. 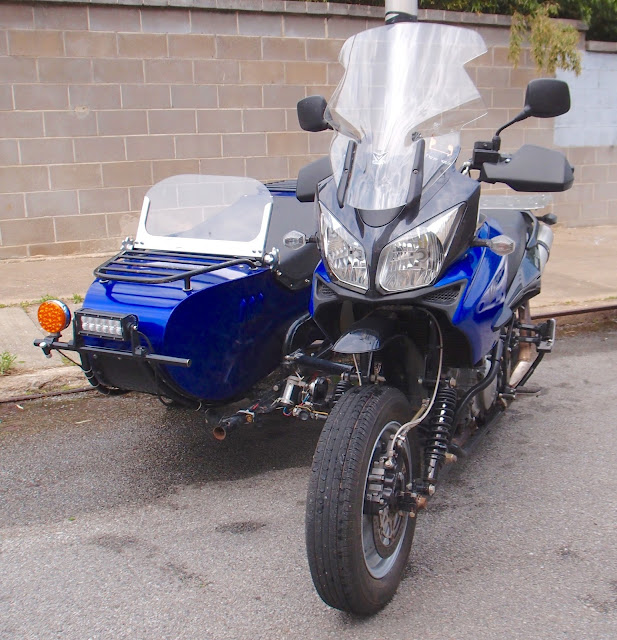 Off then to Baltimore for a test ride on Big Blue, the rig. Quickly a deal was struck. From there I trailered the Big Blue and the Mini-Mate camper to Claude Stanley of Freedom Sidecars in Pennsylvania to make the modification from a sidecar to a SideCamper.

The blue sidecar was removed and sold to someone who had been waiting for a rig.

Claude was great to work with in designing a new sidecar frame for the Mini-Mate. Late into the night Claude and I drew out sketches and ideas on scrap paper until we finally agreed upon a plan. He and his crew had never built a sidecar camper before but were excited about the challenge.

As the build progressed, we introduced, discussed, accepted and rejected many ideas before arriving at the final product.

Always in the back of my mind were those nagging questions:

Would the new set up be ridable?

Would it be reliable with that huge sidecar load?

Would the Vstrom have enough power to move the rig at highway speeds?

What kind of gas mileage would it get?