Now that I am back in the safety of my own home and the 48-10 ride is history, several thoughts, memories and observations came to mind as I prepared the documentation for submission to the Iron Butt Association for certification of this ride.

One:  In spite of the jokes and laughter, there really is such a thing as Monkey Butt....

Two:  Minor inconveniences become major points of contention when one is saddle bound for hours end. By day five, the high dollar aftermarket saddle started poking my hips causing them to go numb. It looked wide enough but not for a serious long ride. It is now for sale on Craigslist.

Three:  As each day heated up into the 90's and 100's, discovered the transfer pump to move fuel from the auxiliary tank to the main tank, was too weak to push against the build up of pressure of gas expanding in the main tank. After experimenting with various techniques, found the only solution was to open the gas cap on the main tank to release the pressure, then start pumping fuel over. Without the auxiliary tank I would be stopping for fuel every 100 miles which would not be possible out West, where there are places where gas stations are far apart. One sign read "Next 76 miles, no service".

Speaking of gas stations...   Four: Because I was required to get a printed gas receipt from each state showing the time, date and location in order to verify that I had indeed been in that state,  I counted on the gas pump to print out a correct receipt. It was frustrating to discover that many gas pumps are now programmed to NOT print the City/State on the credit card receipt. Of course this is discovered AFTER I have pumped the tanks full. Then I would have to remove my helmet and gloves, go inside the station in order to request a duplicate receipt. One clerk told me I already had a receipt, so why did I need a second. Another station's duplicate receipt did not show city/state either. The store manager finally made a copy of my receipt and one of his store invoices that showed the city/state. Hopefully that will satisfy the IBA auditors when they review my paperwork.  In one state, in three out of five gas stops, the pumps were out of paper, so a time consuming trip into the store was necessary.

In every endurance challenge, besides the physical challenge there is the mental challenge. Most often the mental is the tougher barrier to success than the physical. After three or four days, the newness wears off, the enthusiasm wains and daily grind takes over. One begins to question their ability to complete the event in time and even if they were foolish to even think they could do this. Tiredness, boredom, pain, exhaustion and physical weakness wear away at the spirit. Overcoming whatever the daily challenge is, be it heat, mechanical, eighteen wheelers, rain, or cold, it saps the will to continue. One almost hopes for a ride ending excuse so you can stop and go home. A quick turn of fate will end this nonsense. A sign, any sign could be used as an excuse to quit.  Everyone would understand why I had to stop if I had a good excuse.

Then out of nowhere the sign appeared,... in HUGE letters...  from the Duke himself! 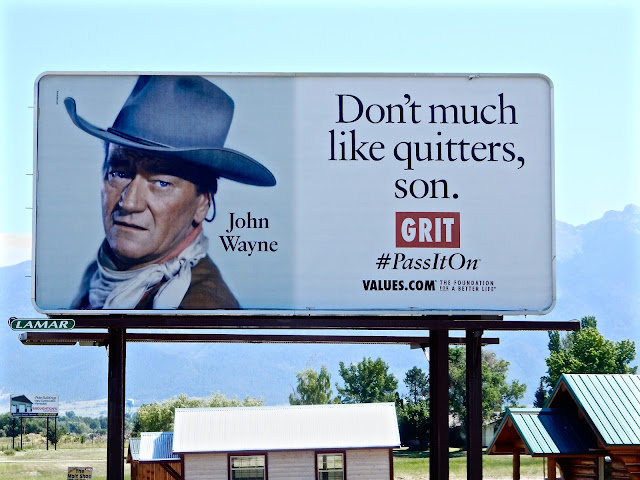 Couldn't get much more plain or direct. There was no way I could quit now, not after the Duke himself took the time to send me a sign.

Our struggling for success or achieving failure can be determined by fate, a sign or our own determination and grit.

So was the trip a disaster? No, not at all.  Glitches and inconveniences are to expected. If none, everybody would be doing this and there would be no challenge.  Overall the ride went very well, by following a meticulous prepared route and time schedule that was over three years in the making.