Remember those weeks when progress comes in stutter steps?  You know, two steps forward and one back. These past few weeks have been non-stop stutter steps.

While waiting for a few more parts to arrive and before reinstalling the fuel tank, decided to check and adjust the valves.  Having worked on BMW and Ural motorcycles, I knew adjusting valves was a quick simple process. But since the Kawasaki is a different animal, did my research on KLR650 valve adjustment.

For a simple one cylinder engine, adjusting the KLR valves is a major process. At least the fuel tank was already off.  In this photo of the cylinder head, beneath the silver cross bar is the top cover plate over the valves.  This has to be removed. 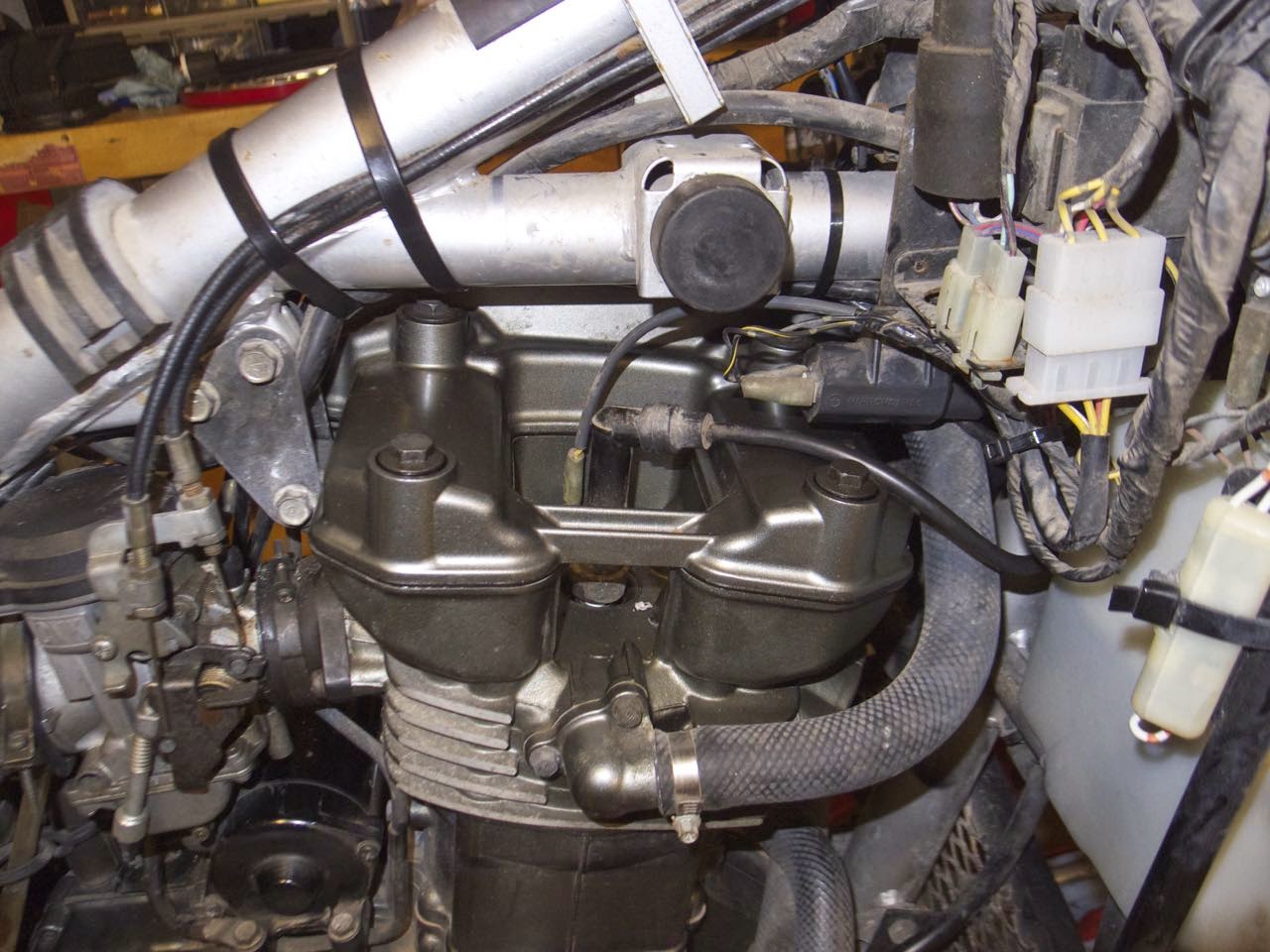 But, to remove that top plate, one must first remove the radiator fan, the top engine mount, various electrical connections, wires and cables, then carefully slide the cover out through the left side, all the while trying very careful to not damage the fragile gasket. This is not something you want to do in a motel parking lot.  While sliding the top out, FEDEX delivered a box with the awaited carburetor parts. Great! Oh NO,  NO... they sent parts for a different KLR.  Oh well, send it back and wait another week for the correct parts to arrive.

Back to the valves. There are four valves, two intake and two exhaust. All four were out of acceptable range. Quick call to a local Kawasaki dealer to find the right size shims, a race across town to be there before they closed and returned to finish the job.  Now on a BMW or Ural, they don't use shims, so you can just adjust their valves with a wrench and screwdriver in a motel parking lot. Not the Kawasaki.  Finally got everything set right and closed up. Won't know if it will run until I finish with the rest of the bike.

The new exhaust muffler arrived. Looks cool. Repainted the old rusty header with high temp paint. They are ready to be installed, except for a small issue. 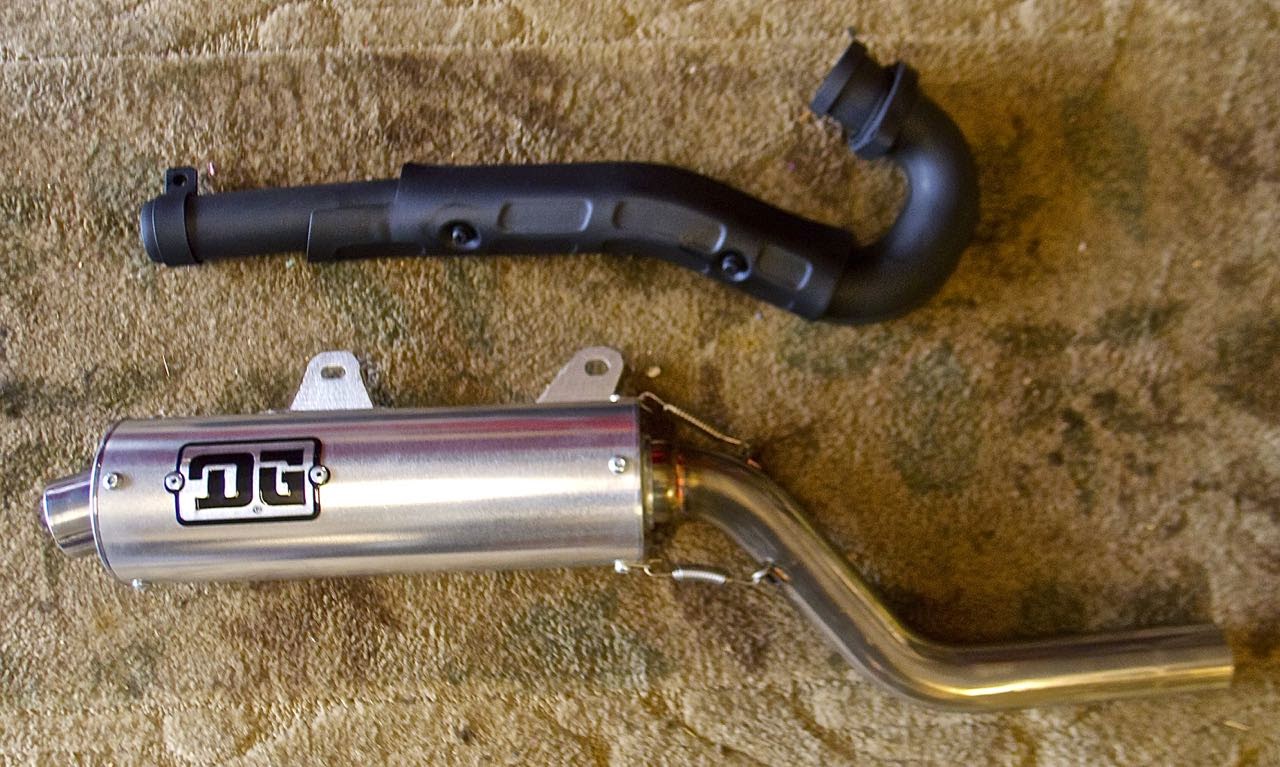 Look again at the top photo, center left, you can see the carb with cables going into it. Remember the wrong parts FEDEX delivered?  The easiest way to work on the carb is to loosen the clamp screws and rotate the carb to gain access to the bottom without having to totally remove it. If I install the exhaust, it will block access to the carb bottom. So installing the exhaust will have to wait until the correct carb parts arrive. Rework the carb first then install the new exhaust.

Okay, let's do something else while we wait. Upgrading the wiring and fuses is something I want to do and is best done with the fuel tank and seat removed. However it seems the US Postal Service has lost a two day Priority Mail package that was sent ten days ago..... Called the supplier, Twisted Throttle. They graciously agreed to ship another wiring set up at their expense and they will fight with USPS. Great service from Twisted Throttle.

Now what? Several mornings I noticed a small puddle of oil under the rear.  Hmmm, the only oil back there is in the rear shock, Since I have to upgrade to a a heavier spring on that shock for sidecar use, let's remove it now. 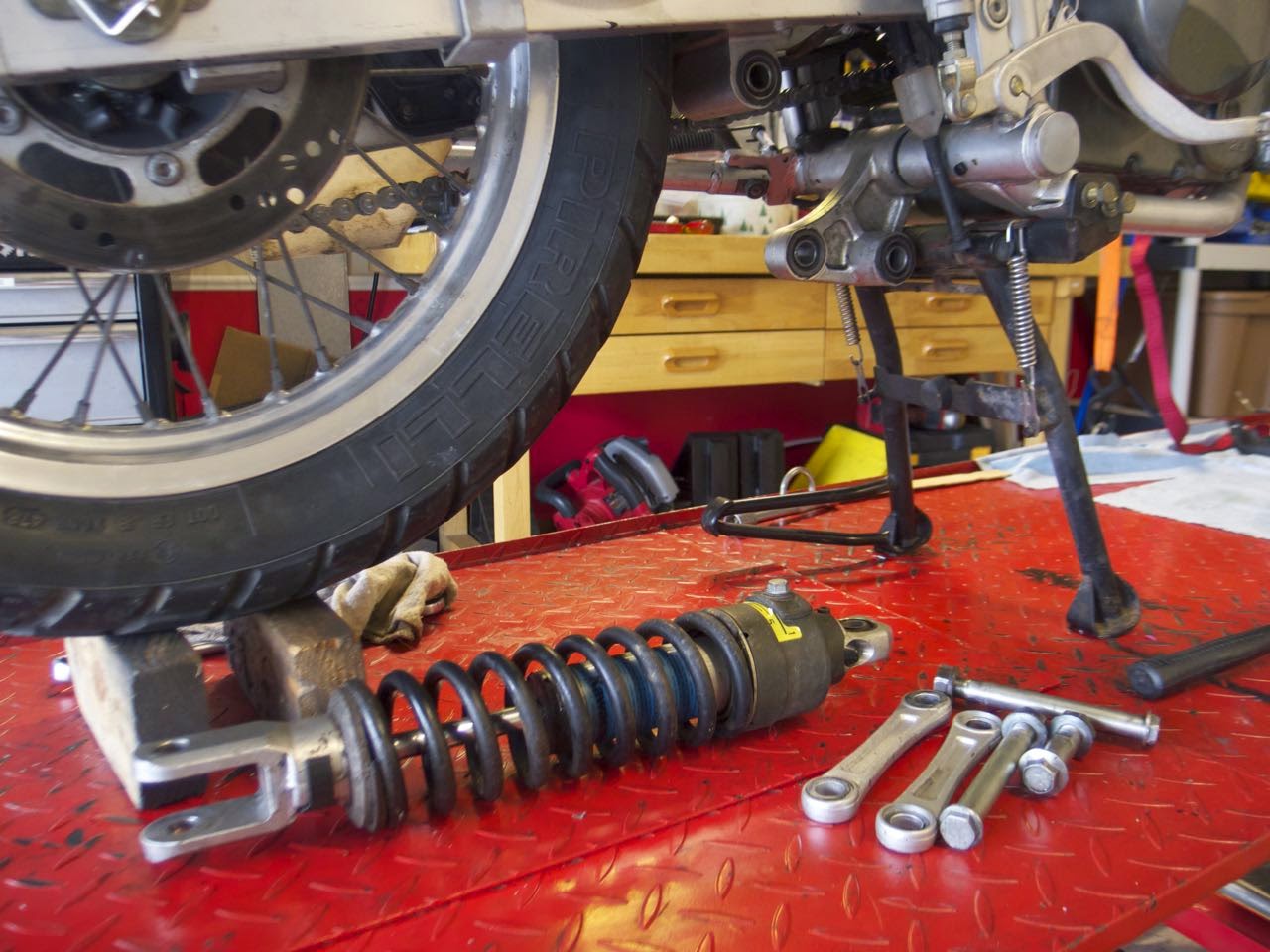 Found the source of the oil. The rear shock is shot.  Looks like someone might have tried to rebuild it previously as the bump stop is missing.  A friend suggested I rebuild this shock, But after investigating the cost and issues involved in rebuilding, decided to try to locate a slightly used shock. Rebuilding can run as high as $300.

Spent three days on eBay, Craigslist, web sites and phone trying to locate and negotiate a replacement shock. There are some very good new aftermarket shocks available from $600 to over a thousand, but since the plan is to sell this rig after I finish the ride in South America, am trying to keep the total investment down.  Spent hours chasing several dead end leads in Florida and California. As of this writing, have a lead on a used factory shock in Kansas for $100. Keep your fingers crossed.

Hopefully this week more parts and missing boxes will arrive. Then some progress can be made.