Fernando, our MotoQuest guide, is seen here mounting a small plastic horn on the handlebars of this child's bicycle. Fernando had brought three horns with him as gifts. Soon two other children from the San Ignacio village appeared, each wanting a new horn on their bike. After the three disappeared to show off their new prized sound maker, we could hear the beep - beep - beep sounds coming from different parts of the village.
Fernando was a super hit with the kids. 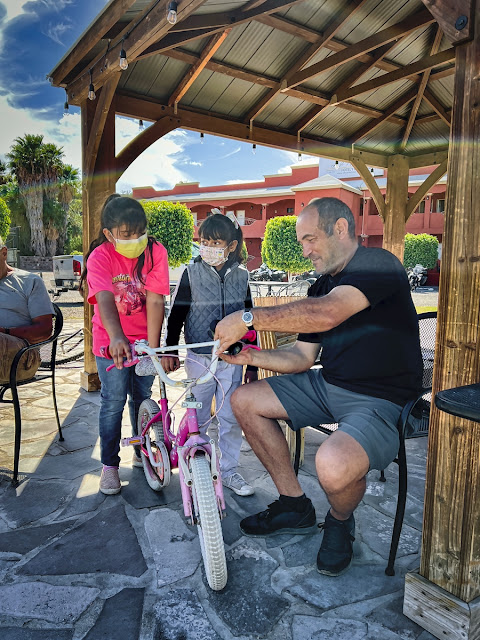 Obviously is was warm that day, little did we know that in a few short days we would be riding  in freezing weather, wishing for warmer clothing.
Back in San Ignacio, the sun was shining, the people warm and friendly. The setting sun highlights the stone church steeple. 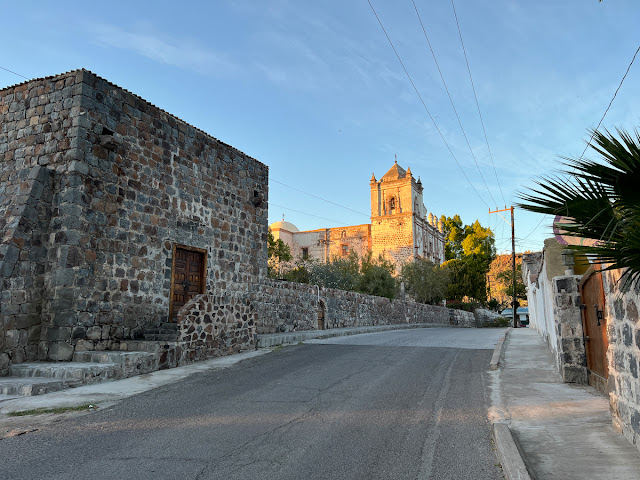 That evening, this elderly musician was once again serenading the outdoor guests at the local restaurant, working for tips. Most of the songs he sang were his original compositions, with a few well known  traditional Mexican tunes mixed in. 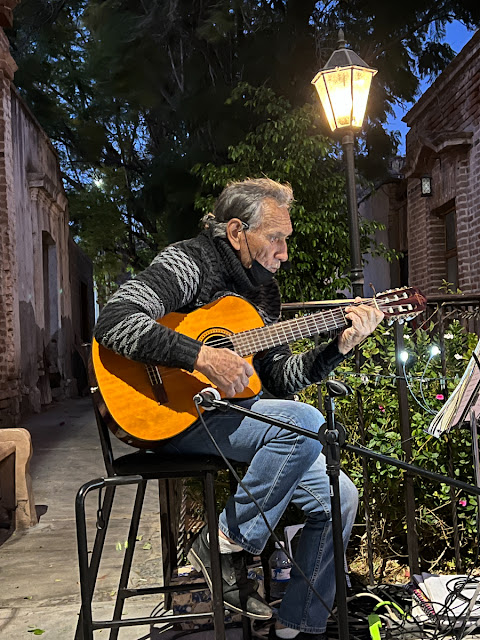 A day later as we were preparing to leave La Bahia de Los Angeles for San Felipe, MotoQuest's home office in California advised Fernando to change our route due to an approaching winter blast coming in off the Pacific. They would make new reservations for us in an upscale motel in Ensenada and cancel the reservations in San Felipe. Why this sudden change? Fernando explained that the route from San Felipe to Ensenada took us over several high passes where previous tours had encountered snow, ice and freezing temperatures. Dangerous combinations for motorcycle riders.
The best laid plans are tossed when mother nature takes over. We were told to ride directly to Ensenada using the lower roads. What was to follow was an adventure and extremely challenging ride.
While at a lower elevation, the road still consisted of many, many mountainous twists and turns. The temperature dropped considerably, the winds picked up. Within the first hour on the road, we are riding in gale force side winds trying to blow us off the road. The two wheelers leaned harder into the wind and paid careful attention to sudden fierce gusts.  I leaned hard to stay on the roadway and to keep the rig from lifting.
Then rain arrived with a vengeance. Not so much quantity but as a hard blowing force. Rain drops stung the skin when they hit. And hit they did. The harsh side wind mixed with stinging rain forced me to ride with only one eye open for hours at a time.  All the while watching for oncoming vehicles, curves, dips and rises in the road, as well as wandering livestock. The storm was not bothering the cattle and horses as they roamed the roadway and shoulders, but we on two and three wheels, exposed to the force of the storm, suffered.
Four hours later as the storm finally lightened, we arrived in Colonia Nueva Era, a small farming village in the major agriculture area of Baja California. They had no plans for rain runoff. They don't get much rain here. We are in a desert. The main street was flooded across and on both sides on the road. Where the road was not flooded, thick gooey slippy mud covered the surface. Riders extended both boots to act as outriggers in an attempt to stay upright. It worked.  No one fell. But we rode slowly.
Our machines were soon covered in mud, creeping into ever nook and crevice that will take years to displace. Some mexican mud will be baked into a new permanent residence.
Electric heated hand grips were a blessing, as was leak-proof riding gear for those who had it. Those who's gear leaked, suffered more than others. They will be shopping for new waterproof gear once they are back in the states.
The upgraded hotel awaited us in Ensenada. The storm has moved further east,
the view of the bay from the room was calming, though still cool out. 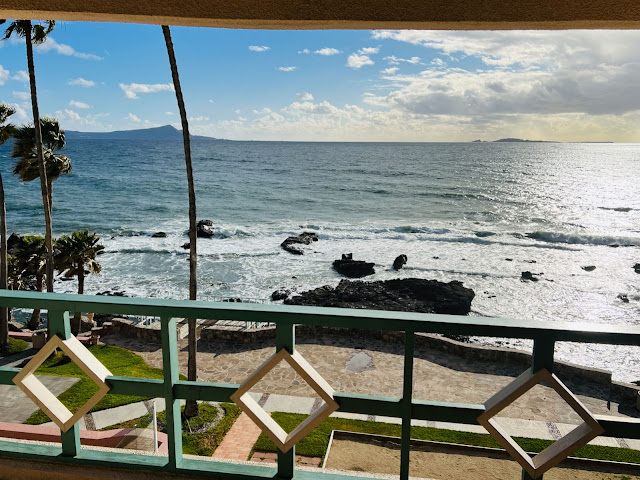 After a night in a warm bed, we ride the next day to Tecate and crossed back into the United States. Who would have expected that the ground would be covered with snow in southern California? The rest of the group proceeded to Julian, CA, I turned the rig east, riding in freezing temperatures until I could drop down to sea level elevation. I rode on to Brawley, California, where the truck and trailer were waiting.
In all a fantastic ride with the MotoQuest gang, Fernando, Brad, Ian and the supporting home office. Would love to be part of a future MotoQuest sidecar ride down Baja and back.
What better way to spend February than be in the warming sun of southern Baja? I encourage you to look to Baja for your next winter escape. Trailer your rig to southern California if you have to, then ride.
Getting into and out of Mexico was easy. Do your research if going on your own. Everywhere we went, the people were smiling, warm, helpful and friendly. The food was great, gasoline was available, food and drink prices were less than anywhere in the US. No problems experienced by anyone in the group.
Ride safe, ride far my friends,
CCjon
Posted by CCjon at 11:29 PM