While recuperating from the pedestrian accident last month, decided being homebound was a good time to sharpen some photo editing skills, maybe even learn a new technique or two.

After downloading images from the camera to the computer, the editing process begins with questions:  First, is there a good composition within the raw photo that can be brought out?
Is the subject matter interesting or attractive?
If not an interesting subject, can it be a good abstract design?
What do I want the viewer to see or look at?
Does the image suggest a certain mood, feeling or attitude?
Any distractions need eliminating?
Any details that need to be brought out?
Any technical flaws needs correcting?

This first photo is one of eight taken all within a minute or two, pre-dawn of an Alaskan fishing boat. With the sun not up yet, lighting is dim, not much color to work with, a foggy mist, the boat was constantly moving, changing direction and position. Background details are muted and mushy.

I always try to compose a photo before snapping the shutter button so the amount of cropping required is reduced. No cropping was required on this one, but editing can improve it. 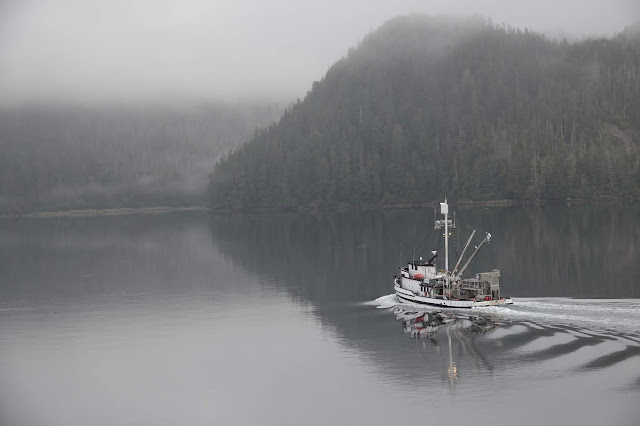 After removing all color except red, added a copper tint overlay then remove some of the mist from the background, the tree are now sharp without completely removing the morning fog. The far left shore is brought into play in the scene and the remaining red on the boat creates a focal point for the eyes. The feeling of pre-dawn light and ocean mist is preserved while bring out details in the image. 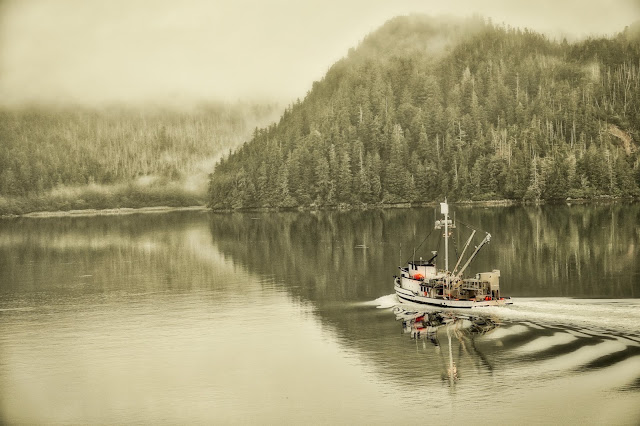 Next photo is of a new overpass in Houston, not far from home. Though the composition is good and the golden hour light warms the scene,  the colors in the yellow and red signs detracted. They are not where I want the viewer to look. 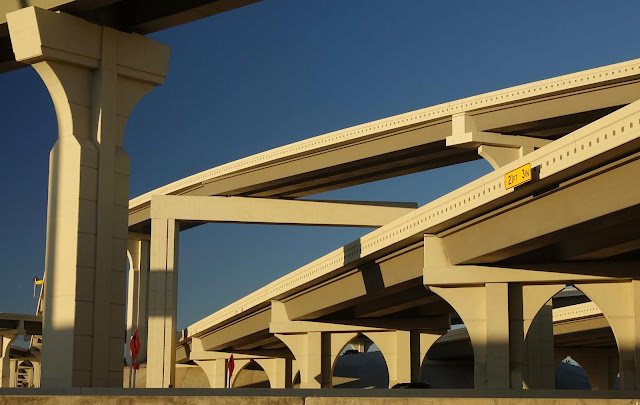 By converting to a black and white image, the image is now an abstract design of light and dark shapes and lines, playing off of each other, making the eye dance around looking for an anchor point until it pulls back and focuses on the image as a whole. While it first appears busy and jumbled, once you pull back and see it as a whole, it is quite simple, pleasing and clean. No cropping needed. 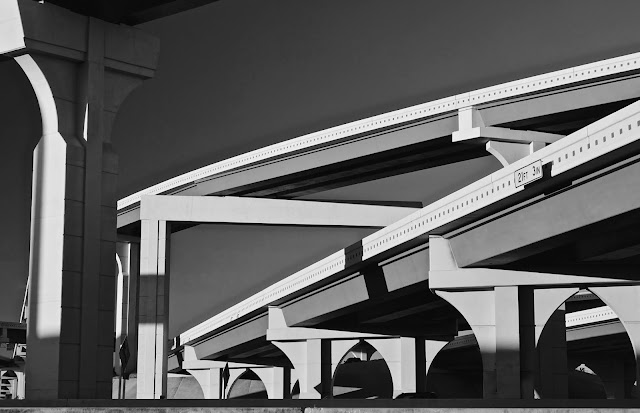 Liked this photo from the time I first saw it in the camera. But when downloaded to the computer, the eye wants to focus on the guys face.  Which is normal but not where I want the viewer to look. Plus there are several other distractions in the photo. By cropping out the electrical box, part of the menu sign and the colorful red poster, the image is now less busy. Too many items in a photo only confuses the viewer, they don't know where you want them to look. 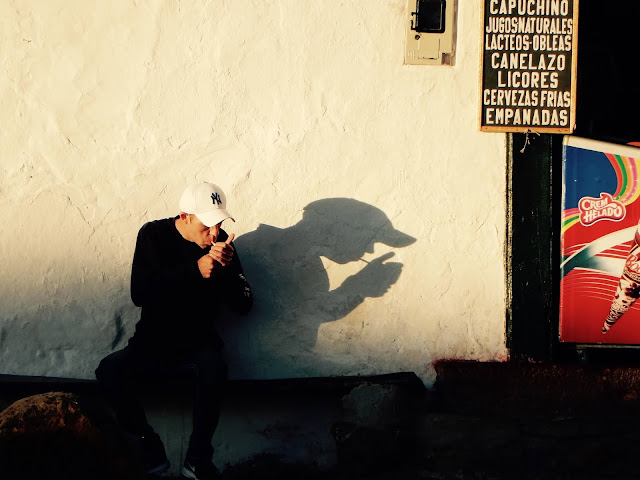 With the image cropped, could now work on improving the details and focal point. In the original, the stucco wall lacked detail yet the strong color pulls attention to it. The red in the poster attracted too much attention.

Converted the image to black and white, pulled up the wall details and enhance the contrast so the eye's focus moves from the man's face to the oversized dark shadow lighting a cigarette on a highly textured surface. The wall's texture is an important image element as it dominates the scene's backdrop adding a tactile sensation.
The Spanish menu sign, the rough stucco wall, smoking in public, exaggerated shadow figure all give a feeling of another country, another culture. far, far away. The image is reduced the three elements. 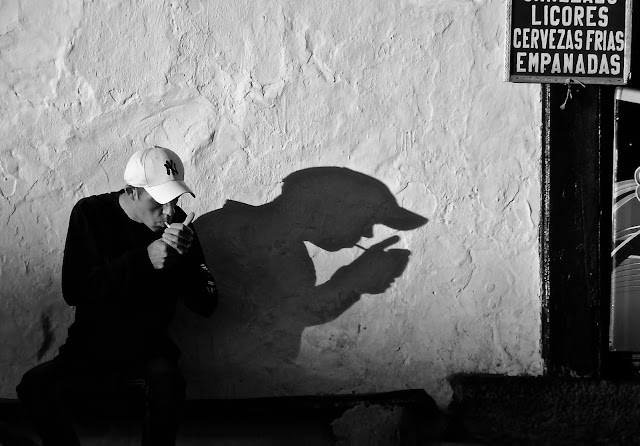 In this next image I could see in my minds eye where I wanted it to go, but now how to get there. It took more thought and trying different approaches to finally bring out a story. 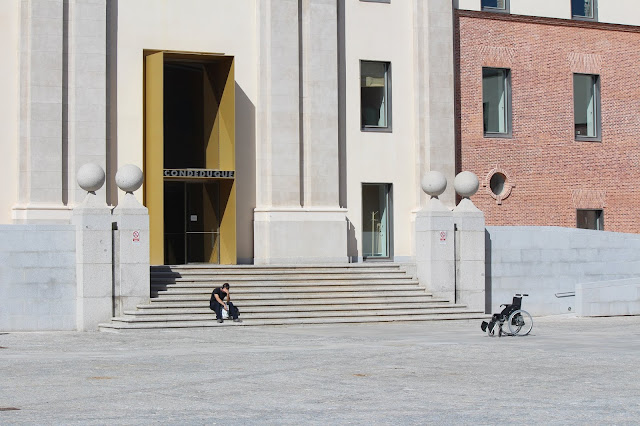 First, being taken in a large open courtyard, the man is much too small to see details so cropping is needed.  The gap or distance between the man and the wheelchair needed to be emphasized more by removing a lot of excess building. Cropping will do that.

So the viewer can write their own story of what they see here, they need to be able to see the man's posture and the separation from the chair. Color was removed as the desired mood conveyed is not one of joy. The building details did not add to the story but took away attention, so color was removed.  As is, the background is secondary to the story. Many times in a color photo the details in the background will overshadow the image or the focal point the photographer wants to emphasize. By removing color as an element, the background has less importance,  the background details are less dominating.

With the scene now set, the viewer's focus is on the only three variables in the image:  the man, the wheelchair and the distance between them. The viewer will create a story in their mind as to what is going on.

As you can see here, there were not major or radical changes made to the BEFORE images, making them totally unrecognizable from the original. No, editing many times is a simple tweaking, adjusting or shifting of focus to bring out the best in a photo.

Every photo demands a different approach to bring out their best, to serve a purpose. Some are for telling stories, others to add details to the written narrative in the blog, still others are pure artistic expressions to appeal to the eye and mind.

I have heard some comment that photos should be shown exactly as they are taken. In response to that, I'll defer to the Dean of American landscape photography, Ansel Adams.

The editing process starts with many questions and the finished image will either answer questions for the viewer or create new questions in the viewer's mind. It's all in the intent of the photographer/artist.

Photography can be a great vocation or a great avocation, that will challenge one's mind and creativity. So many different skills to learn, so many different stories to tell. While I enjoy learning new photo editing techniques, polishing old skills, pushing the photo images in new directions, they still only reflect what happens in life out on the road.

Am getting cabin fever not being able to ride. So to appease the wandering mind, have been making riding plans for this summer.

What repairs or servicing needs to be done to which rig?
Where to go?
Which route to take?
How long will it take?

Ride safe, ride far, hope to see you on down the road.