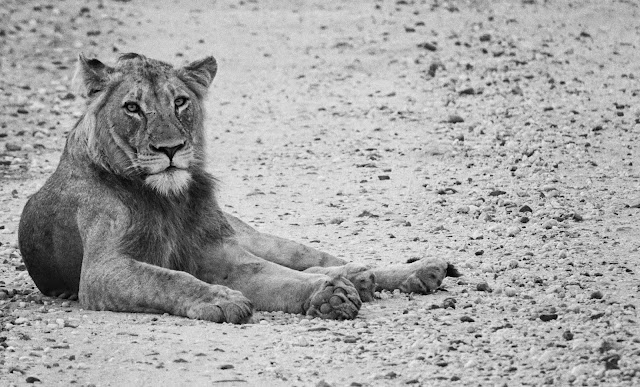 Once upon a time Lion and Jackal were very good friends. They always hunted together.

One day Lion killed a big fat eland. Wanting to hunt some more to feed his big family,
Lion asked his friend Jackal,
"Will you go fetch my family to carry this large animal to my home?" 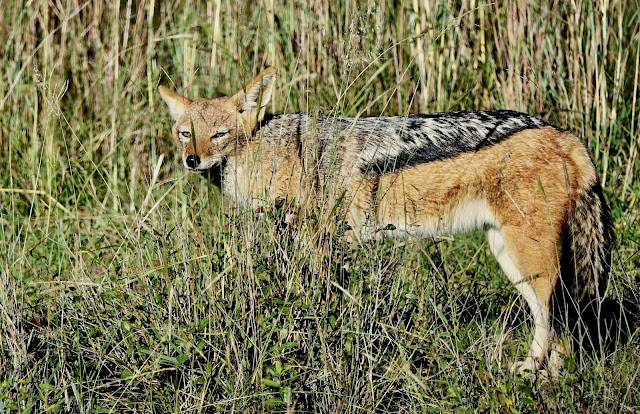 As soon as Lion left, Jackal instead gathered his own sneaky family
and they had a fine feast of eland.

Lion tired of hunting after finding no more game. Returning home, he asked his wife:
"What did you think of that fine eland I killed?" "What eland?" his wife snarled.
Startled, Lion asked if Jackal didn't call them to bring the eland home.
His angry wife replied that she hadn't seen Jackal all day.

Furious, Lion stormed to the waterhole to find Jackal with a full belly lounging there.
Lion pounced but Jackal was too quick, diving down an empty burrow amongst
the large roots of a tree. Lion could only grab Jackal's leg that was sticking out.

"Now I have you!" growled Lion, but the ever clever Jackal replied:

Why don't you find a rock and hit it?

Letting go to go find a stone, Jackal instantly dashed away and climbed a mouse-skin rope
up to his house on a rocky ledge. Angry Lion tried to follow but the rope couldn't hold
his heavy weight, breaking, dropping Lion to the ground with a thud.

Lion has never forgiven Jackal for stealing his eland.
From that day on, Jackal is always wary, staying well away from any lion. 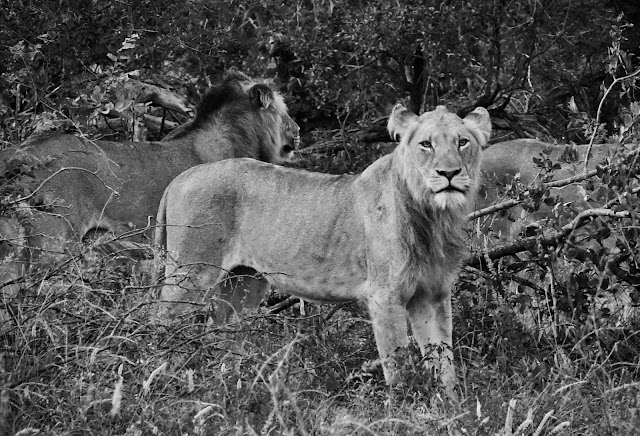 Fortunately Lion learnt to hunt with other lions in a pride
and never befriended the Jackal again.

Ride safe, my friends. Never steal from a lion or... turn your back on a Jackal.

p.s. Thanks to the folks at Raptor Retreat, South Africa for sharing this fable.
Posted by CCjon at 6:51 PM