Damit III, the Tortuga (Turtle in Spanish) seems to always need a little wrenching done on her. The latest, has been the clutch chattering... or chuddering.  Depending on how you hear sounds.  The bike develops a chattering around 3500 rpm.

According to the world of Vstroms, that sound is the clutch basket wearing loose. Lucky for Damit and I, the number one rebuilder of Vstrom clutch baskets, Werks Parts, is based in the Missouri City, a suburb of Houston.  Drove down and met Terry the owner. After explaining what causes the chattering, he showed me how his precision rebuild process eliminates that problem, forever.
With the Werks basket in hand, I open up the Vstrom engine clutch.

The number one tool for working on any piece of machinery these days, is a laptop computer. So one can watch the instructional video that walks you thru the process. Terry said to just follow the video he made and everything will fit back together.

One must carefully balance the laptop within eyesight while you work. 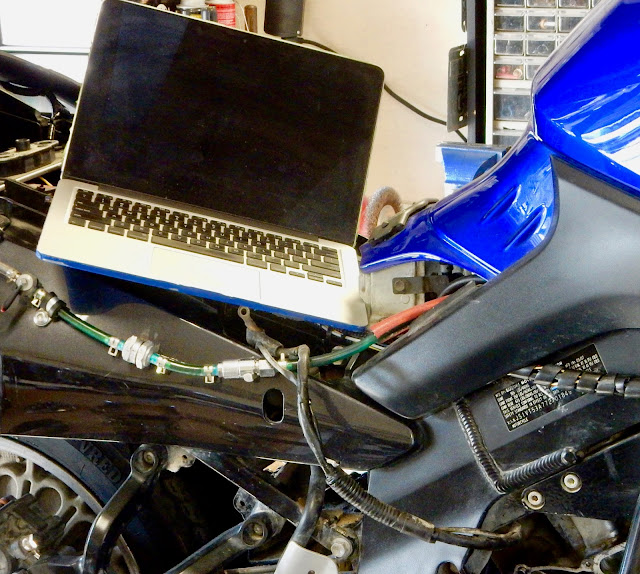 Laying out the pieces as they come off the bike, trying to keep them in order, 'cause round things want to roll out of sight. 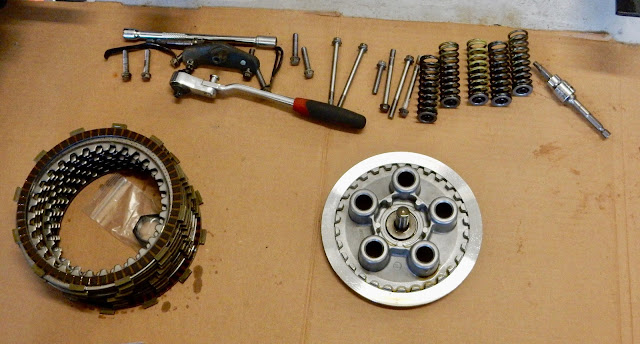 A special tool is needed to hold the clutch basket in place while using an impact wrench to remove the big black center nut. A tool that only has one purpose, but is the only tool that won't damage any other part when holding the basket tight. 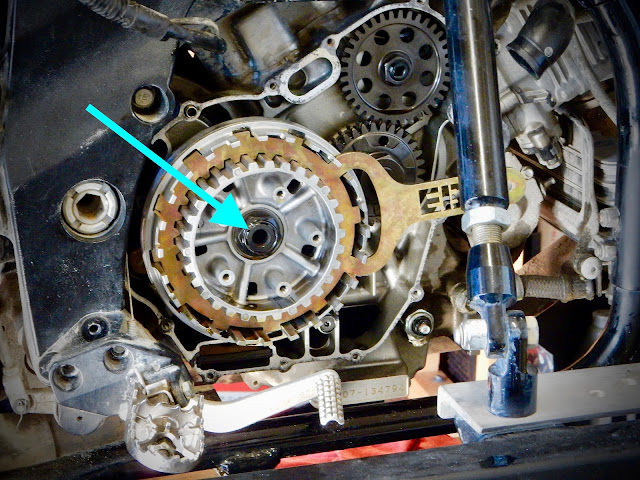 The right side of the engine looks bare with everything off. 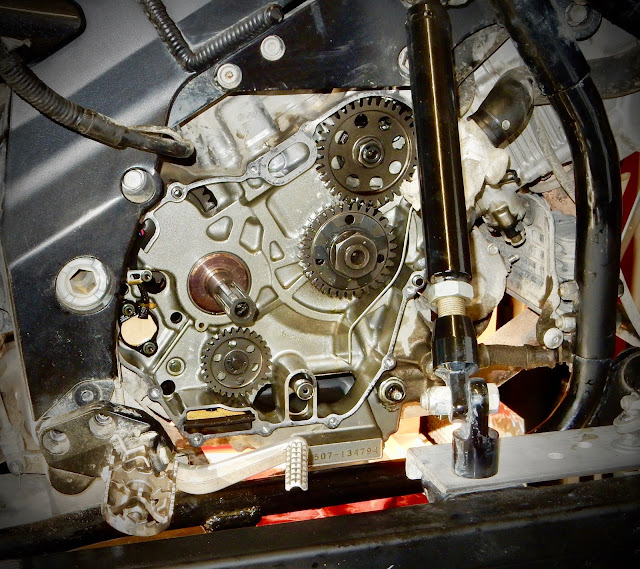 With everything removed, your workbench should look like this. Terry's rebuilt basket lower right, is ready to go on. 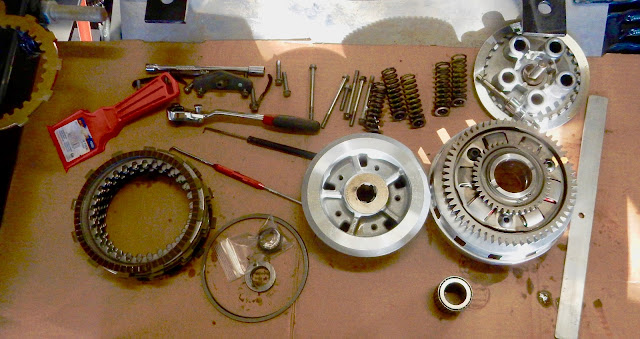 After scraping pieces of old gasket off, install a new gasket, the basket, then clutch plates and cover. Reconnect all the hoses, refill the oil and antifreeze... ready to roll.

Now to test Damit and all the wrenching she has undergone for the past two months. A 600 mile shakedown ride to a sidecar rally in Bunkie, Louisiana should be the perfect test.

First, a stop at the Cowboy Church in Cut-n-Shoot, Texas.
Yeah, there really is a town named Cut-n-Shoot.
Even has a post office and a constable who can shoot. 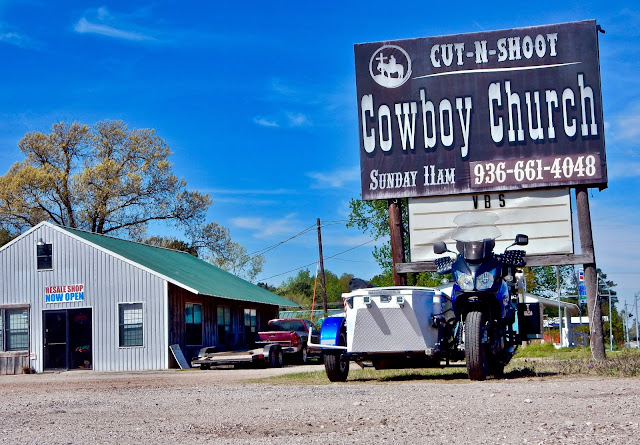 Rolling into Louisiana, the ground flattens out, fields open up, the grass is greener.

There is that eternal springtime question, is the tree dead or will it struggle thru and green up one more time? 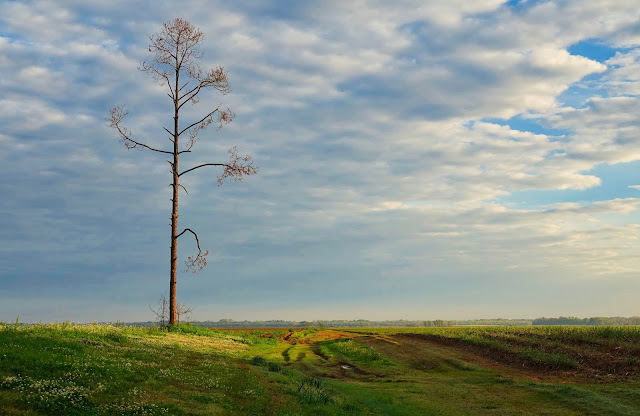 Rolling into Bunkie, by following the bayou road. 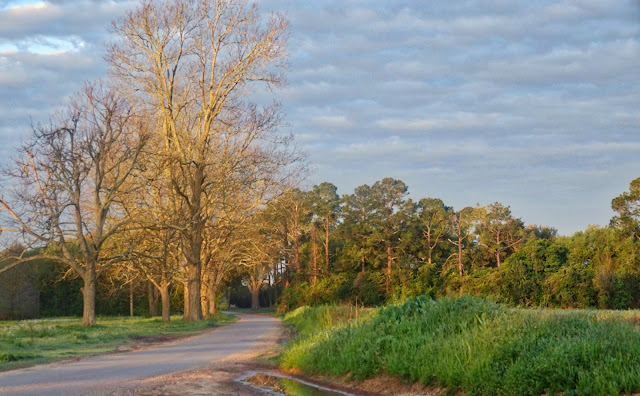 The Bunkie High School football stadium is quiet, waiting for another season to start... 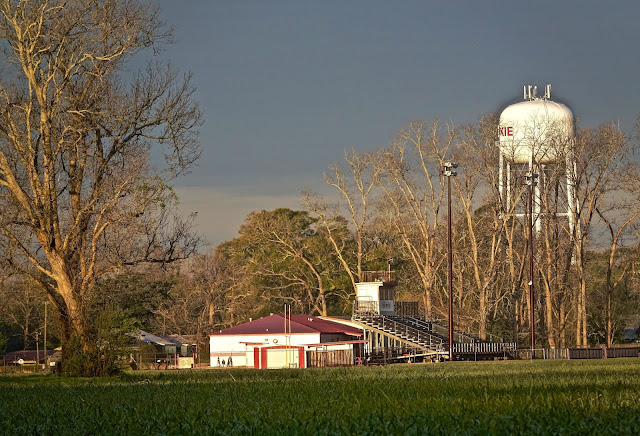 Set up camp under the trees near Kent with his hammock. By nightfall there were eight more campers in the small grove. 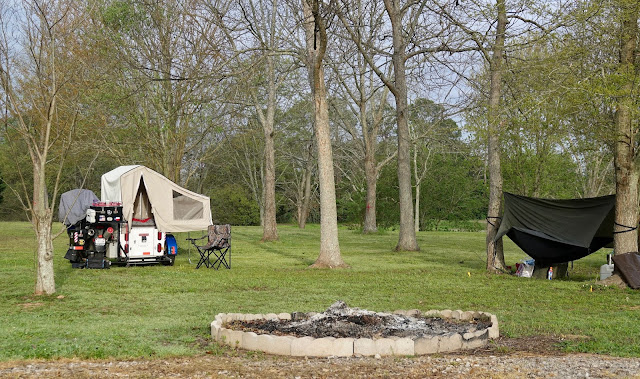 Next morning after a great breakfast and coffee provided by Barbara and Larry, our rally hosts,
Lee gives out the riding instructions for the day.

Rigs are lined up and ready to roll... 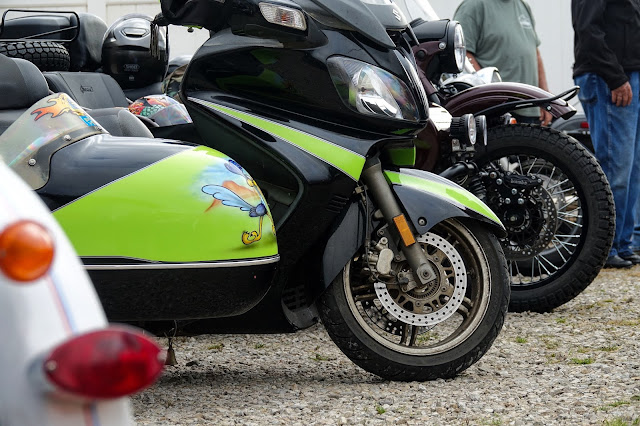 Princess is anxiously awaiting the ride to start. 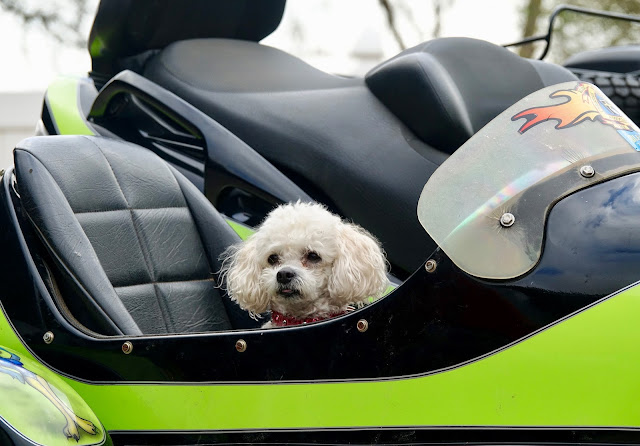 A few last minute adjustments made before the word is passed down the line. 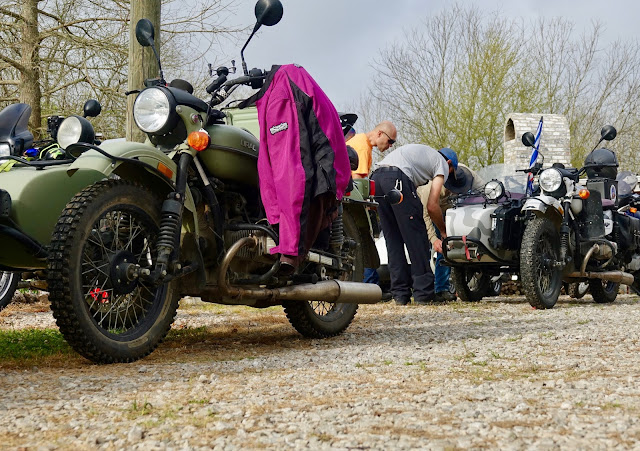 Side Stands Up!
Engine roar to life, helmets are cinched tight. Lee on his blue BMW leads the group.

It's odd that we still use the expression from the two wheel motorcycle world,  Side Stands Up, to signal the start of a ride. Many sidecarists have removed the side stand from their rigs as unnecessary weight.

Out of the yard rigs roll... 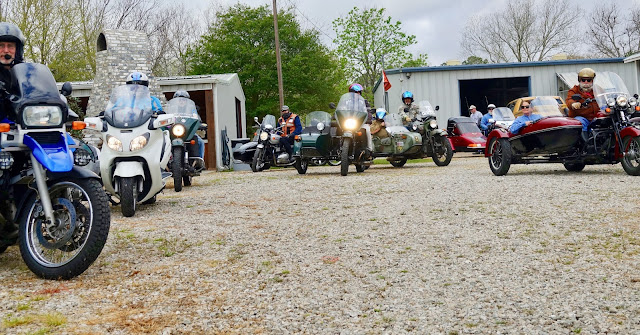 Harold on his slower Russian Dnepr sidecar is the last one out, bringing up the rear as the sweep rig. 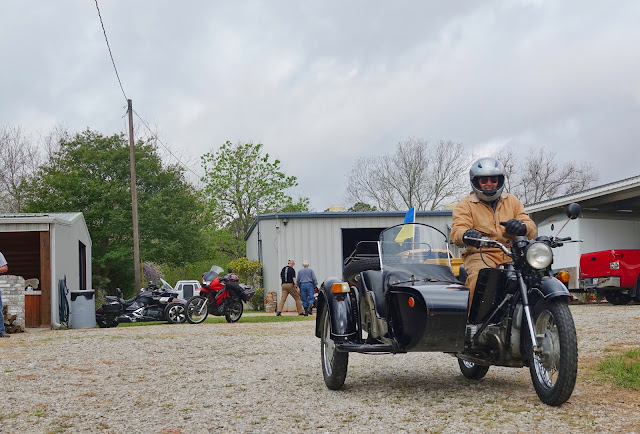 Damit rode smooth, all the work done has improved her performance.
Of course that job is never ever completely done.

I think a new rear shock is needed as the rig scraped bottom several times between Texas and Louisiana..., but... Best of all, no clutch chattering.

Wrenching on the sidecar is what keeps me busy and out of bars.....lol.
... until I go on a new adventure. See you next month.

p.s. Richard, here is photo of the engine lift or shop crane. Makes the job of removing the tub much easier. 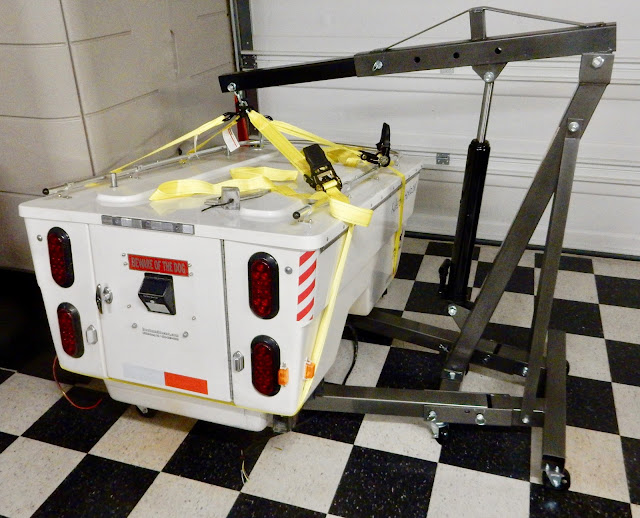